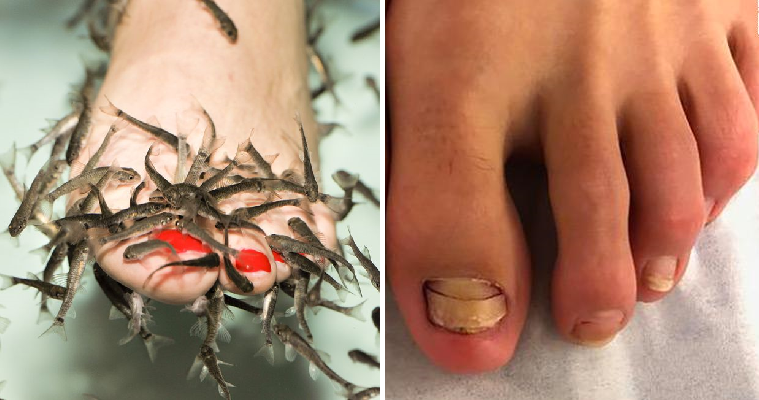 Fish spas used to be all the rage when they first came out. However, although interest may have dwindled down as of now, the spa ritual of submerging your feet into a pool of water as fish start to nibble away the dead and dry skin on that area is still pretty popular. After all, it seems like a great idea as you can also relax while your feet become soft and smooth again. However, it turns out that these fish spas that offer you a pedicure may not be as good as you think. According to CNN, a young woman in her 20s from New York apparently went for a fish pedicure and as a result, it led to the loss of her toenails. Say what.

Based on a report posted in the journal JAMA Dermatology, the bizarre case caught doctors’ attention as the woman had a rather common condition known as onychomadesis. This caused her toenails to begin separating from her toes, which would usually result in them falling right off! Apparently, the woman had visited a fish spa six months before this and tiny fish known as Garra rufa had nibbled on her feet. Before her condition, she did not have any other injuries, infections, medications, autoimmune and heritable conditions that would have caused her toenails to fall off, but she mentioned that she had received a fish pedicure.

The report’s author, Dr Shari R. Lipner, an assistant professor of dermatology at Weill Cornell Medicine and director of the nail division, deduced that it was very likely that the fish pedicure had caused the onychomadesis. Luckily, the woman is fine now but her toenails will take some time to grow back. “We don’t see the [nail] shedding until months after the event, so I think it’s hard for patients and physicians – especially if they’re not even aware that fish pedicures can do this – to make that connection. The patient had no other medical history that she could link to her abnormal toenails. I think we’re fairly sure that it was the fish pedicure,” Lipner explained.

Although it isn’t exactly clear how the fish may have caused the onychomadesis, Lipner said that it’s likely trauma from the fish biting multiple nails that caused the nails to stop growing. “This case highlights the importance of skin and nail problems associated with fish pedicures and the need for dermatologists to educate our patients about these adverse effects,” the report stated. This is not the first time that fish spas have been known to cause problems as previously, there were reports of infections being spread through fish pedicures too. Sometimes the fish and tubs used may not have been cleaned properly between uses, which could lead to the rise of infections.

While not all doctors are convinced by this report, there are still very valid concerns about sanitation issues. Essentially, the fish in the tub are actually starved so they will feed on your dead skin! Perhaps it’s better to stick to the usual pedicure instead?