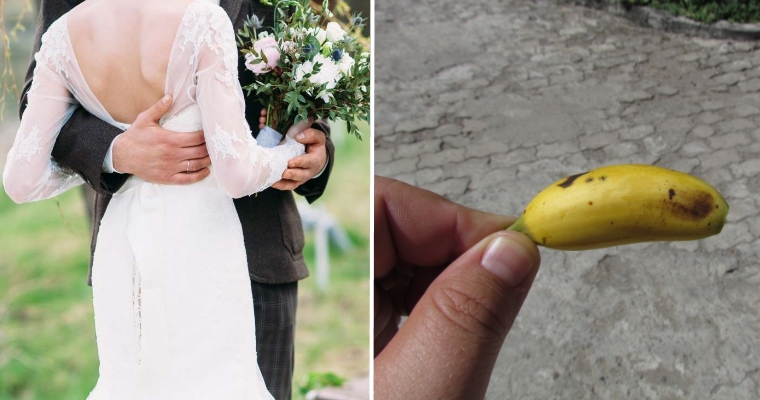 Have you ever ordered something at a restaurant and got disappointed by the size of the portion?

Yeah, on an unrelated note, a woman has taken to Reddit’s “Am I The A**hole” Subreddit to voice her frustration after she was given a small but unwelcome surprise on her wedding night – her husband’s hidden micropenis.

The 27-year-old user, u/throwaway_peen34 shared how they had dated for six months, and gotten engaged for another six before getting married.

“So, we only dated for six months. We’ve been engaged for another six and just got married on Saturday,” she said. “I literally just got back from my honeymoon a couple hours ago.”

The husband was not religious but claimed to be “old fashioned” and waved off any sexual advances, wanting them to wait for marriage to have sex. “We got close to fooling around a couple times, but it never went far,” she explained. “I tried, but he always stopped after it went ‘too far’.”

On her wedding night, the couple ran into a minor issue when the woman discovered her husband possessed… a smaller-than-average ‘member’.

“I honestly just acted like nothing was out of the ordinary and went to town with him, but… I don’t know. I kind of feel lied to. Like a half-truth… or something was intentionally withheld from me.”

After discovering his penis was “about an inch and a quarter” (approx 3.1 cm) long, she wanted to ask the internet if she had the right to be upset.

The internet naturally, had some thoughts about her situation. Commenters generally agreed she wasn’t a bad person for feeling upset about it.

One commented saying that the decision to marry after six months was too early. “At this point, I think you have a lot of surprises ahead of you,” the person said. “Buckle up cause you just married a stranger.”

Whew! We wish the woman all the best and hope she will come to appreciate all the little things in her marriage. For the rest of you, what are some absolute deal breakers when it comes to relationships? Let us know in the comments!

Also read: 24yo Man Thought He Contracted STD, Turns Out He Never Washed His Penis Before