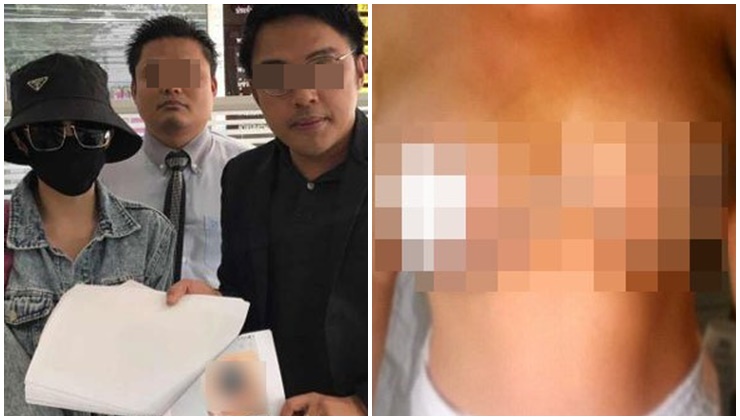 The plastic surgery clinic’s shareholders even blamed the poor woman and dared her to report the claim!

Recently, a 29-year-old Thai woman paid 70,000 baht to a plastic surgeon (RM9,590) for a breast reduction surgery that resulted in her losing her nipples! After the operation, the woman had her doubts because the surgery ended a lot sooner than she expected it to. Nonetheless, she decided not to think too much about it since she trusted the clinic and would return for a checkup.

Unfortunately, things didn’t get better for this poor woman. She said she found a black wound on her nipple a few days after the surgery and suspected that it was rotting. While the doctor assured her that this was normal, the wound began to harden and cause her pain.

She returned to the clinic and when the doctor assessed the situation, he said another operation was necessary. He then proceeded to make her lie down on the surgery bed and blocked her eyes with a towel.

According to China Press, the doctor injected her with drugs and she felt him perform a series of actions that tore the wound.

When she was finally permitted to see what was going on, the poor woman discovered that her right nipple was gone and the left nipple was slightly protruding! Outraged by the way her body was violated, the woman talked to the doctor’s assistant and demanded 500,000 baht (RM68,502) worth of compensation money.

The woman tried to appeal to the clinic’s shareholders on this matter but they refused to take responsibility for the damages incurred on her. Not only did they refuse to apologise, they blamed her for making too many complaints and dared her to report the claim.

Sadly, the woman had to resort to finding another hospital that would undo their mistake. The estimated cost of the surgery to fix the mistake was 300,000 baht (RM41,100).

She has since been spotted reporting the case with her lawyer at the Sudir District police station, Bangkok. Hopefully, the clinic will be dealt with accordingly for their irresponsible actions.

Read more: 39yo Woman Pumped Her Breast Milk So Hard That it Broke Her Capillaries & Cracked Her Nipples