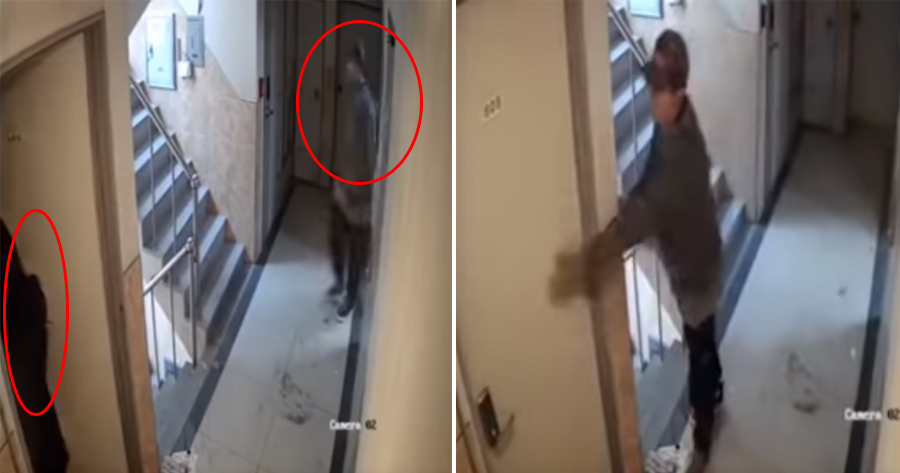 Decades ago, the risk of kids getting kidnapped was fairly low and it was pretty safe for kids to roam about the streets. Some even walked or cycled a fair distance to school and would be able to return home without encountering any suspicious strangers.

However, things have changed in the present age as predators and stalkers could be just around the corner. Even adults feel unsafe as stalkers these days are getting bolder and more violent.

This was made evident when a woman managed to escape a stalker by just a split second. Any later and something bad might’ve happened to her!

It was 6.20am on 28th May when the woman was walking back to her home in Sillim-dong, Seoul. However, she wasn’t alone as there was a man trailing a few metres behind her, reported Channel A News Korea. He probably tried to make it seem like he was just another pedestrian, but CCTV footage shows that the woman turned her head around a few times, indicating that she actually noticed the man following her. She continued walking nevertheless and made it to her apartment. However, as she entered her apartment, CCTV footage from another camera shows her standing outside her door as she unlocks it, but what she didn’t know was that the man was right behind her, waiting for the right moment to “pounce on her”. Thankfully, he did not succeed as he came out of hiding just a split second after she went into her house and shut the door behind her. But he didn’t stop there as he continued to linger around outside the door, testing a few times to see if he could open the door. The woman later called the police, who arrested the man known as the “Sillim-dong Attempted Rapist” online the next day. The Gwangyang Police Station division for home invasion made the arrest, although it is unlikely that the 30-year-old man will be charged with rape.

“In order to charge for rape, there needs to be violence or threat. It’s difficult to confirm (a rape attempt) just based on the CCTV footage,” stated the police.

This is honestly so scary!

Always be sure to look around you whenever you are outside. It’s best to go to a crowded place instead of back to your own home if you sense someone following you and don’t be afraid to ask for help!