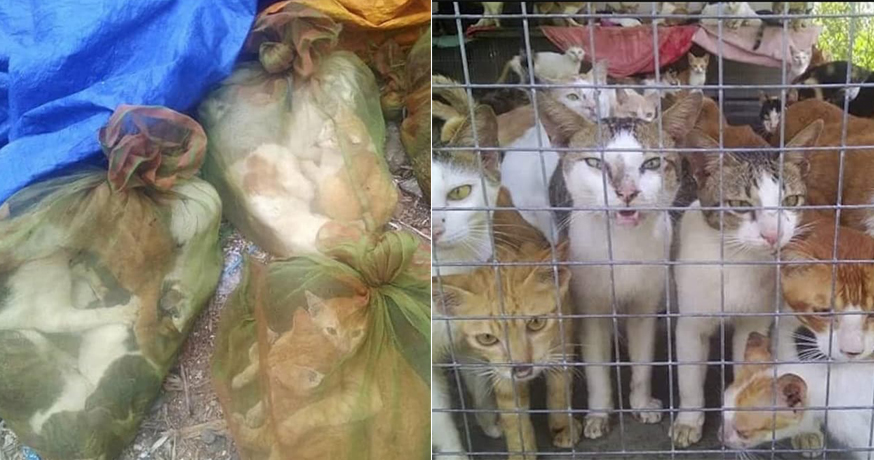 Doesn’t your heart sink whenever you see news of cute dogs and cats being killed for their meat in certain countries? How could anyone kill them, just look at dem adorable creatures gifted by God! LOOK AT ‘EM!

Unlike some countries, Malaysian folks are thankfully, not jumping onto the bandwagon of this horrible culture. However, there have been cases of this trade happening in our country recently. Say what?!

According to the Malaysia Animal Association (MAA) Facebook page, they have uncovered two cases of illegal sales of dog and cat meat by Vietnamese nationals in Johor Bahru and Selangor. Phew, at least the culprits are not our fellow Malaysians.

The case that happened in Johor Bahru was discovered by a netizen on Facebook on March 31. She came across a Vietnamese couple publicly selling dog meat online, and was terrified to see the gruesome pictures of butchered dogs. They were selling the dog meat for RM18 per kg, and left their contact number in the caption for potential buyers.

Warning: Viewer discretion is advised if you want to see the unedited pictures here. In Selangor, MAA was tipped off on a black market selling cat meat by Vietnamese nationals as well. They carried out their illegal activities in a hidden premise, with locals as their main customers. Yes, Malaysians actually bought the cat meat. This cruel business of theirs earned them a profit of a few thousands of ringgit per month. #dirtymoney

The cover of these sellers were blown when the suspicion around their activity rose. They posed as adopters wanting to save cats, and made adoptions in huge numbers at once. It made no sense when their ‘adoption scheme’ increased, with more and more cats being adopted at large. Hence, the revelation of the illegal business finally came out! “It is saddening that there are no special laws that punish those who eat dog and cat meat in Malaysia. According to the existing law by the Department of Veterinary Services, the offence will only be charged if the animal dies due to abuse, not slaughter,” MAA wrote. MAA also urges the government to enact a bill to place animals such as dogs and cats under the category of animals not meant for consumption to forbid the killing of these animals in the country.

If you have any information on any activities of this illegal trade, you may inform MAA by sending an email to [email protected]

Do keep a lookout for all doggos and nekos in your area! #protectourfurryfriends