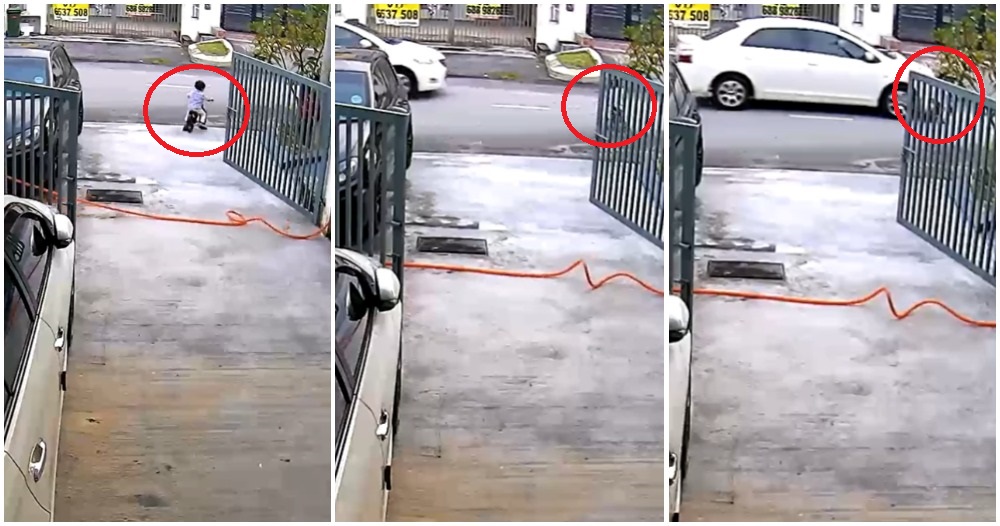 Parents are very busy people and sometimes they have to really multi-task as they have to take care of their children and do chores the same time. However, as humans, we do have our limits and during those times, unfortunate things might happen.

In a post that has gone viral on Facebook with 900+ comments and 1.2k shares, a man was washing his car when his child cycled out of their home and got hit by the car. Once he exits the compounds of his own home, we see a white car approaching from the left side of the road. The car probably thought that the child would avoid him, or maybe they didn’t see him at all, so they crashed into the child and ran over him.

After the incident happened, everyone ran out of the house to check on the child and the driver stopped further down the road and came down from the car to check.

Netizens are very divided on this matter and some of them said that the parents are at fault as the gates are open and there doesn’t seem to be anyone supervising him. Netizens also mentioned that the driver is not to be blamed as the bike and the kid are very low, which means the kid was in a blind spot. Accidents can happen in a split second and most of the time, it’s better to be safe than sorry. What is your opinion on this? Tell us in the comments.

Also read: Video: M’sian Man Who Beat the Red Light With NO Helmet On Gets Into Horrific Accident