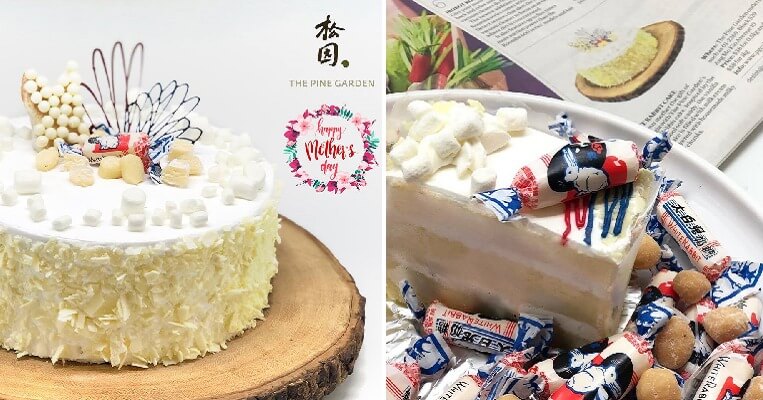 It looks like the White Rabbit craze isn’t over yet! First, there was the White Rabbit-flavoured ice cream that took us by storm, and then other shops jumped on the bandwagon to introduce other White Rabbit-inspired foods as well. Now, a bakery in Singapore has introduced another delectable dessert inspired by that milky candy in conjunction with Mother’s Day, and it looks pretty cool! 大白兔奶糖蛋糕! OMG ! Cave in to buy when saw it.. it tasted exactly like the 大白兔奶糖 and it even has lne sweet on top. #pinegardenscake #pinegarden #sgcake

The Pine Bakery in Singapore recently announced that they have new seasonal flavours on their menu and one of those limited-time flavours is the White Rabbit Cake! Another new flavour introduced for Mother’s Day is the Milk Tea Brown Sugar Bubble Tea Cake that looks interesting too.

The White Rabbit is described as a vanilla milk cake that is filled with luscious milk cream and studded with soft homemade milky candy chunks that are reminiscent of the sweets we grew up with. Do note that the chunks are not actually the White Rabbit candy itself but made with ingredients similar to its namesake and has a slightly heavier taste than the original. Still sounds delicious to us! Meanwhile, the Milk Tea Brown Sugar Bubble Tea Cake is made of a black tea sponge cake, layered with luscious milk tea cream and dabbed with milk tea syrup. They did not use actual pearls in the cake but chose to pair them with chewy brown sugar kanten jelly cubes that contrast well with the light sponge cake.

For more information, head over to their website here.

Looks very yummy! Would you be trying these cakes?