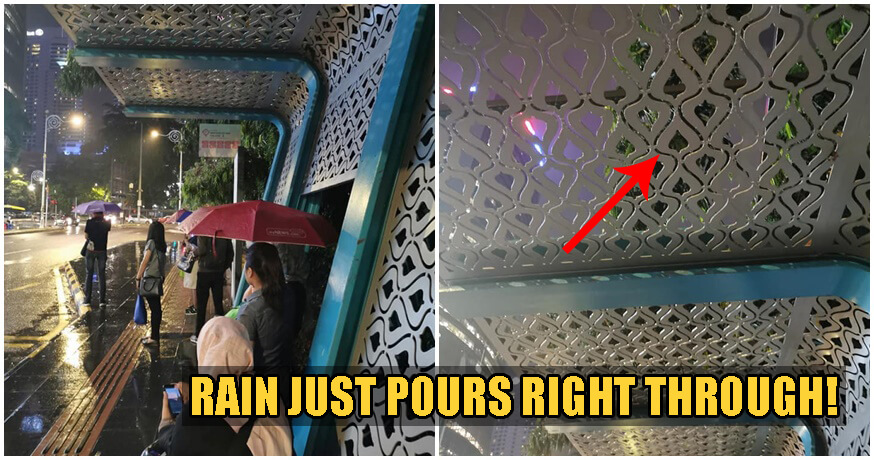 Taking public transport is meant to be a convenient alternative to dealing with traffic jams and parking. After all, you just need to hop on the bus or train, then head to wherever you need to be without much issue. Not to mention all you have to pay is a relatively low fare.

For people who are riding the bus, well-designed bus stops are crucial in making the commute a bearable one. They need to be a shield from the elements, at the very least. And if they have seats, that’s even better!

But in a wild case of form over function, some new bus stops located in KL don’t seem to be doing a very good job at keeping you from the rain or shine, as this story from Oriental Daily points out.

Recounting a recent commute from work he took during the evening, a Facebook user took the LRT to reach KL Sentral, from which he had been planning to then take the bus to head home. But as luck would have it, it started raining (after all that haze, thank God).

While this wouldn’t be much of a problem if one were waiting under a bus stop that had a proper roof to keep the rain out, the one our fellow netizen had to settle for did little good to stop the rain from pouring in. Despite looking brand new and modern, there was a clear flaw in its design.

Do you see it? Or maybe you need a closer look.

Yes, despite looking incredibly beautiful, the patterned motif used on the roof and back of the bus stop has holes in it, allowing for rain to trickle down onto people who were sitting and waiting for their bus underneath. Oops.

In fact, you can see that a woman has to use an umbrella to shield herself from the rain, despite being under the roof of the bus stop. So what’s the point of the roof…?

Naturally, fellow Malaysians have chimed in with their own thoughts on this ‘unique’ design for a bus stop.

Here’s one that wondered if they ran out of budget to cover the holes in the pattern!

And here’s one that said that the contractors needed kickbacks.

One more user even hilariously wondered if the bus stop was made during the recent haze season, and the contractors hadn’t been expecting any rain! Maybe too hazy they cannot see the holes leh.

Whatever the case may be, this odd choice of design for a bus stop certainly does leave us scratching our heads. What do you guys think? How can the bus stop be further improved?