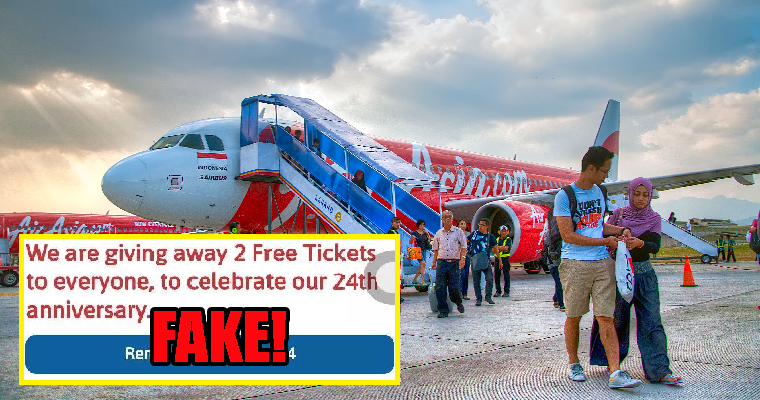 It’s 2018 already and scammers are getting more clever these days. Yet, another scam that is super similar to ones that were circulating last year and the year before has been gaining attention again. This new scam claims that they are from AirAsia and says that the airline is giving out free air tickets. A viral message regarding the promo has been circulating mainly on WhatsApp and gullible people are sharing it with their friends and family thinking that they could grab some free tickets. PSA: If it sounds too good to be true, it probably is!

Here’s what the message says:

It may look pretty legit at first glance, but dig a little deeper and you would find that AirAsia is actually celebrating their 25th anniversary by end of this year. Strike one right there! Plus, if you take a closer look at the link, it isn’t actually AirAsia’s official website although it looks remarkably similar. The letter ‘i’ in Asia is different!

A simple check on AirAsia’s official channels also show that there is no such promotion going on and you can bet that if it is legit, it would be posted everywhere on their pages. Strike three and you’re out! Apparently, Sinchew reported that if you click on the link, it sends you to a page where it tells you to share the promotion with 20 of your friends or groups through WhatsApp and also click on “Claim Ticket” after which you will have to enter your personal details. This will enable you to ‘claim’ your tickets from AirAsia.

In response to this viral message, AirAsia has released a press statement clarifying that they DO NOT have such a promotion ongoing, which they shared on their Twitter account.

“We would like to confirm that the social media post is scam, which uses the AirAsia brand without authorisation, to lure the public to participate in its scheme. We strongly advise the public to disregard such scam and not to click on any links or to provide any personal details.” They said that they will not hesitate to take legal action against such scammers and advise the public to check their official channels or report such scams to them immediately.

There are just too many scams going around to cheat honest people, protect yourself by reading the article below!

Also read: 8 Things Malaysians Can Do to Avoid Getting Scammed