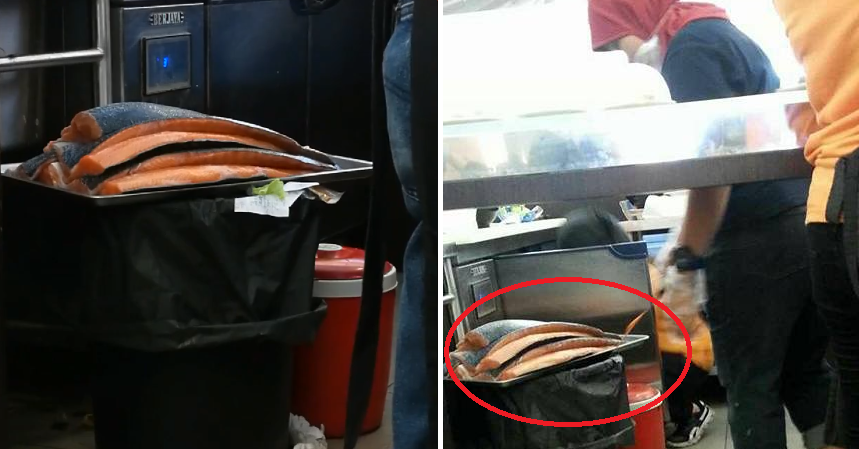 Hygiene is EXTREMELY important when it comes to food. I mean, we ultimately put them into our bodies. Plus we all know how bad food poisoning can get.

So imagine the outrage from Malaysians when a lady discovered that the food customers are going to consume is left on a dustbin.

Christy Yeow was just enjoying her sushi in Mahkota Cheras’ Sushi Mentai when she spotted a few slabs of salmon being placed on top of the dustbin. “How did you manage to get A on cleanliness?

“The salmons have been left on the dustbin for more than 10 minutes. Right after that, it was placed on the preparation table to be prepared and served.

“The staffs threw rubbish into the dustbin while the salmon are placed on top. One of the staff also used (the same) utensils right after scrubbing off the leftover at the side of the dustbin without washing it.”

Her post garnered over 4,300 shares with netizens expressing their disbelief on the matter.

Sushi Mentai later contacted Christy about the incident. They mentioned that immediate action has been taken and they have decided to close the branch from Sept 2 till further notice to retrain their staffs.

They will be posting a public apology on the matter, and also assured everyone that corrective actions have been taken.

Christy ends her post hoping that other outlets will also adhere to the hygiene guidelines so customers will not have to consume potentially contaminated food.

Here’s a video she shared in her post, capturing the staff also cleaning the floor around where the salmon was placed: