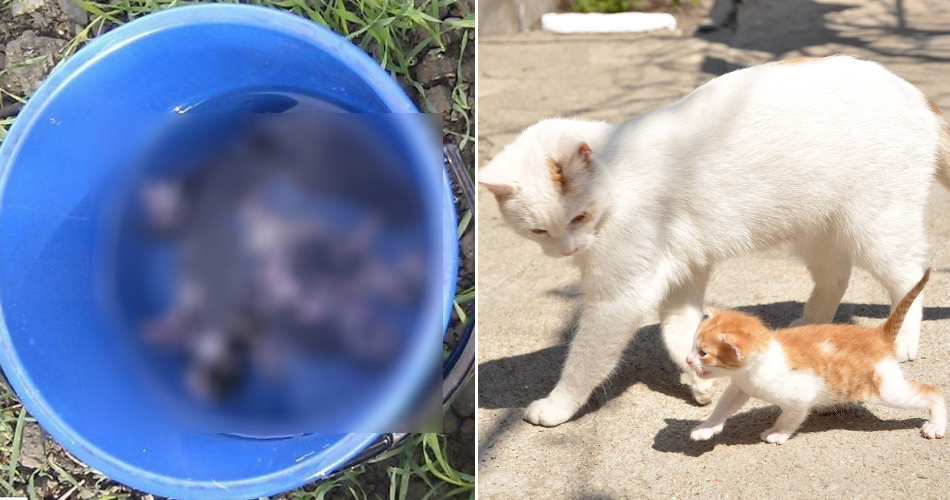 Some of us who own(ed) fishes may recall a time where we’ve overfed our beloved water-pets and unknowingly killed them. Oops. Nevertheless, after we realised what we’ve done, we immediately regretted our actions and would mourn for the loss of our poor fishes.

However, unlike most of us, this young boy recently killed three kittens but displayed no remorse at all after being caught, according to The Reporter.

The story of this peculiar nine-year-old boy went viral on social media as a netizen, Farhanah, shared the horrific story via Twitter.

According to her, this boy found the three kittens and placed them into a basin filled with water and closed the lid by placing a rock on it so that they couldn’t escape. What in the world was he thinking?! Not only that, when the mama cat came looking for her offspring, the boy kicked the mama cat away. Eventually, those little furballs drowned and died as there was no other way out of that misery. Nonetheless, the boy didn’t get away with it because the discipline teacher managed to catch him red-handed.

“Why did you kill the cats?” asked the teacher.

Much to her dismay, he just stood there quietly without an inch of remorse on his face.

“Where’s this boy’s empathy? You’re only nine, why did you turn out like this?” asked Farhanah, who was equally mortified upon hearing the story from her mum.

Farhanah then speculated some possible reasons for the young boy’s state of mind.

“There has to be a reason. This boy must have learnt it from somewhere (action movies/horror/abusive environment). Also, those with little siblings, keep a watchful eye on them especially when watching any movies with scenes of murder/torture/abuse,” she wrote.

On the other hand, fellow netizens also shared their two cents on the issue. Some speculated that the boy may be psychopathic, which explains his lack of empathy, or he could be suffering from conduct disorders.

FYI, Conduct disorders refer to the emotional and behavioural problems in children and adolescents, and often times they are viewed as “bad” by the society. This disorder may have developed because the child could have suffered from brain damage, child abuse or neglect, genetic vulnerability, school failure and traumatic life experiences.

We don’t know how the boy developed those actions exactly but one thing’s for sure, we do hope the boy’s parents will take this seriously and seek help for their son’s behaviour.