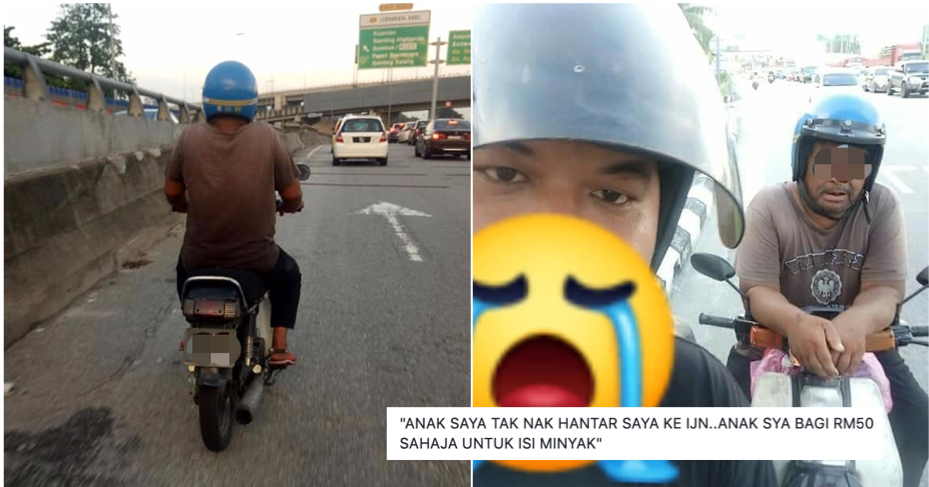 A parent can take care of ten children, but sometimes, ten children can’t even take care of a single parent. Sadly, this statement has been proven time and time again, and yesterday’s incident is no different (3 April).

It was a typical day for Shahrul Nizam Sairi as he took his usual route to work. However, while he was on his way, he saw an old pakcik struggling to ride an old Honda C70 motorbike. Shahrul stopped the pakcik for a chat and learned about his sad situation. The pakcik explained that he was not feeling well and was suffering from breathing difficulty and heart issues.

When asked where he was headed to, the pakcik said he had an appointment at IJN in KL on Monday which made Shahrul question why he did not go to IJN on Monday itself since it was only Friday. Pakcik‘s eyes were teary when he said,

“My children don’t want to send me to IJN. They only gave me RM50 for petrol.”

The pakcik needed to plan his journey and take off earlier because he was sick, his bike was too old, and he probably didn’t know the way.

After Shahrul ensured that the pakcik had rested for a while, he escorted him up to Jalan Titiwangsa and gave him some money to ease his burden. Shahrul ends the post saying that the pakcik then continued his journey alone to IJN.

Let’s take a moment to assess ourselves. When was the last time we were there when our parents needed some help or attention? We should be better; we need to be better because sometimes, we’re all they have.

LATEST UPDATE: A nurse by the name of Norshila Ramli have shared that actually, the pakcik suffers from a mental condition. Read her full post here:

Although the real situation about the pakcik has been revealed, we would still like to applaud Sharul Nizam for his concerns and his effort to ensure the pakcik is safe from harm.

He helped the pakcik without judging him in any way.