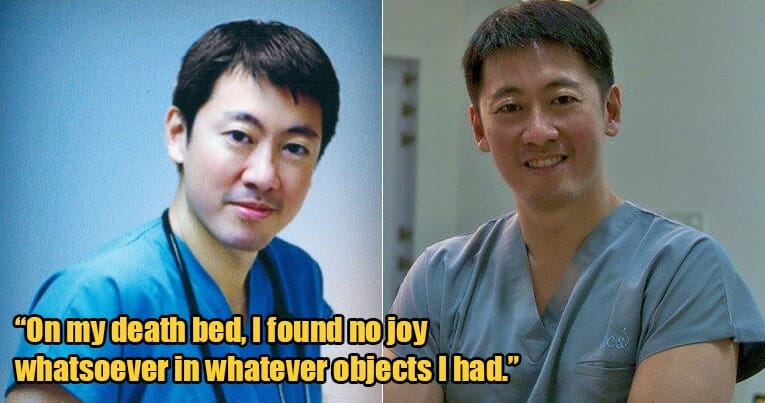 Success is often associated with wealth and finery; people always think that more money equals more respect and happiness. However, one cancer-stricken doctor begs to differ and believes that we shouldn’t hold on to material possessions to be happy.

Asia One wrote that Dr Richard Teo Ken Siang was a wealthy aesthetics doctor who had everything going good. You name it and he had it! From millions of bucks to sports cars, the man was living the dream life.

Nonetheless, all of that suddenly didn’t matter any more when the man was diagnosed with terminal cancer on 11th March 2011 – the disease had made its way to “his brain, spine and dotted his lungs with tumours”. Of course, this news was devastating to both Dr Richard and his wife as he knew that his time on earth was numbered.

His wife, Mrs Teo, said that Dr Richard used to cry himself to sleep all the time because of the pain he endured mentally and physically. The doctor – who switched from ophthalmology to aesthetics to earn better money – saw that even his piles of money still couldn’t help him overcome this fatal situation.

FYI, ophthalmology is a branch of medicine and surgery which deals with eye disorders. Initially, he was in denial because he refused to accept his reality but on his death bed, the doctor then truly saw life in its purest form. Dr Richard, who lived a lavish lifestyle by attending club gatherings and brushing shoulders with celebrities reflected,

“(Every) Chinese New Year… I would drive my Ferrari (to) show off to my relatives and my friends. (I) do my rounds and you thought that was true joy? In truth, what you have done is just to elicit envy, jealousy and even hatred.”

“On my death bed, I found no joy whatsoever in whatever objects I had – my Ferrari, thinking of the land I was going to buy to build my bungalow, having a successful business.”

His said that it was “inner voice” that urged him to reconsider his idea of happiness and before he passed, Dr Richard had reformed idea of joy. He continued,

“See the irony is that all these things that I have, the success, the trophies, my cars, my house and all. I thought that (they) brought me happiness. But having all these thoughts of possessions, they brought me no joy. I can’t hug my Ferrari to sleep… No, it is not going to happen.”

“What really brought me joy in the last 10 months was interaction with people, my loved ones, friends, people who genuinely care about me, they laugh and cry with me, and they are able to identify the pain (and) the suffering I was going through.”

He added that during his time in the oncology department, he witnessed people with cancer die every day, but he couldn’t empathise with the patients. Nevertheless, after becoming a cancer patient himself, he finally felt what they went through. Therefore, he then learned the compassion which he was supposed to have while he was a doctor for the cancer patients. Dr Richard said,

“If you ask me, would I have been a different doctor if I were to re-live my life now, I can tell you, yes I will. Because I truly understand how the patients felt now. And sometimes, you have to learn it the hard way.”

That said, Dr Richard, be assured that there’s absolutely nothing wrong with being successful or rich. But, the problem lies in wealth becoming too much to handle, and we become so obsessed with acquiring more.

“I became so obsessed that nothing else really mattered to me. Patients were just a source of income, and I tried to squeeze every single cent out of these patients,” he explained.

Just like that Tamil saying which goes, “If you have just enough money in your hands. You have control over it! But if you are drowned in wealth up to the neck, it gains control over you!” He finally challenged every doctor to put their feet into the patient’s shoes and make an effort to understand their pain. Dr Richard finally concluded,

Even though Dr Richard passed away in 2012, his wife is very proud of the man he eventually became. She said that he wanted “the new generation of doctors to change their mindset”. He wants them to treat and care for patients as human beings and to do their job sincerely. Take note, young doctors!

Well, Dr Richard has certainly given some really sound advice which we all should apply to our daily lives. On that note, we wish that Dr Teo finds peace in the afterlife, and we hope that his advice will continue live on. What’s your take on Dr Richard advice? Let us know in the comments below!

Note: Dr Richard’s open letter to doctors and people all around the world was covered by Asia One in 2016 and has resurfaced as netizens discover his story. So, you can find the original article here.

Also read: Five Malaysian Dads Give Us Timeless Words of Advice for Father’s Day This Year