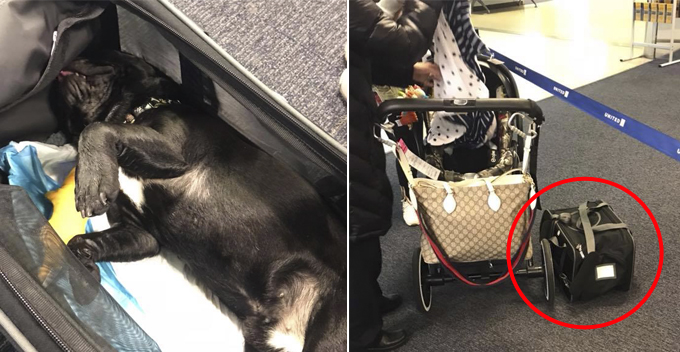 Last year, United Airlines made international headlines for dragging a passenger out of his seat on the airplane. Just yesterday, the airlines caused another uproar again after causing a puppy’s death on the airplane.

Netizen June Lara shared her heartbreaking experience on Facebook and it went insanely viral with over 110,000 shares in one day. She was on an airplane from Houston to New York during the incident. Here’s what she said.

“Today, I boarded my first United Airlines flight. I sat behind a family of three and thought I was lucky – who isn’t when they get to sit near a puppy?”

“However, the flight attendants of flight UA1284 felt that the innocent animal was better off crammed inside the overhead compartment without air and water. They INSISTED that the puppy be locked up for three hours without any kind of airflow. They assured the safety of the family’s pet so wearily, the mother agreed.”

When the plane touched down, the family opened the kennel and called out the puppy’s name, Papacito, but there was no response. The mother then frantically tried to resuscitate the 10-month-old puppy, but failed to bring him back. “This little guy fought hard for his life, filling our flight with his cries until he finally ran out of breath. United Airlines does not care about the safety of their furry travellers. This poor family paid $125 for their pet to be murdered in front of them.”

We can’t help but wonder, why didn’t someone check on the puppy after hearing his cries?!

Responding to this tragic incident, a spokesperson from the airlines said it was a mistake, and that the flight attendant shouldn’t have instructed the mother to put the puppy inside the overhead compartment. Well, it’s too late, isn’t it? It was reported that United Airlines allows pets in the cabin provided that they are transported in kennels that can fit under the seats, CNN reported.

This mistake has caused an innocent puppy’s life. We hope the airline can do a thorough investigation and prevent such tragedy from recurring in the future. RIP Papacito.

Also read: Over 30 Dogs Raised by Old Man Poisoned to Death by Cruel People in Penang