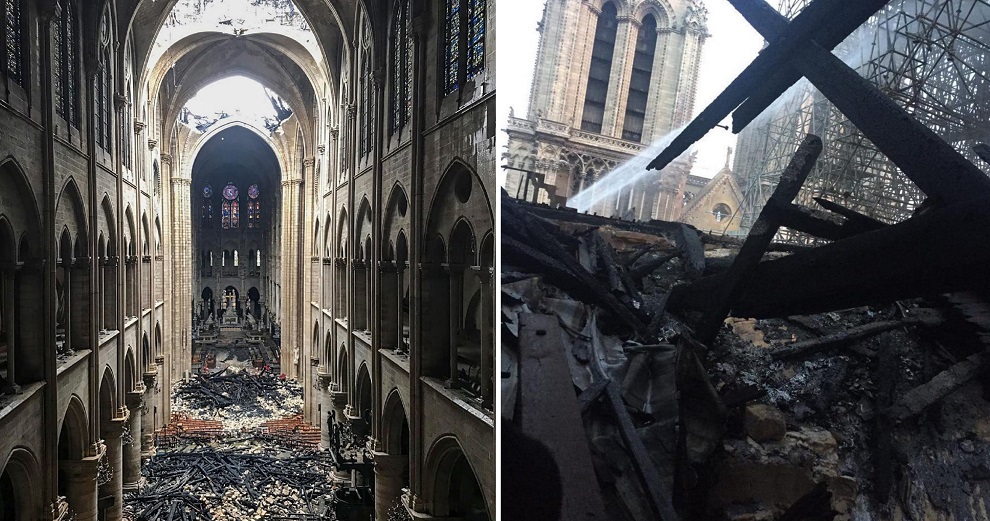 On Monday (15th April), the world was shocked when the iconic Notre-Dame cathedral in Paris, France, unexpectedly caught fire. The 850-year-old structure sustained significant damage, causing its spire and roof to collapse after it was engulfed in flames.

French president Emmanuel Macron has since deemed the disaster a “terrible tragedy”. Meanwhile, the cause of the fire is yet to be determined, according to BBC News. Now, in the aftermath of the fire, photos of Notre-Dame’s interior have been released, showing just how much damage the uncontrollable flames did to the centuries-old building. #Breaking: Newly released pictures from inside the cathédrale Notre-Dame de #Paris. #NotreDame in #France, from this morning showing the extensive damage and the, the Rose window was spared from the fire! pic.twitter.com/jeGhM0g0VQ

According to Bloomberg, it took nearly 12 hours to completely put out the fire and it is estimated that restoration works could take years to complete. Emmanuel Macron declared in a statement,

“We will rebuild Notre-Dame because that’s what the French people want. That’s what our history deserves, because that is our destiny.”

Meanwhile, a number of individuals and companies have come forward to donate large sums of money to fund restoration efforts. According to Business Insider Malaysia, at least USD$728 million (approx. RM3 billion) has been pledged so far.