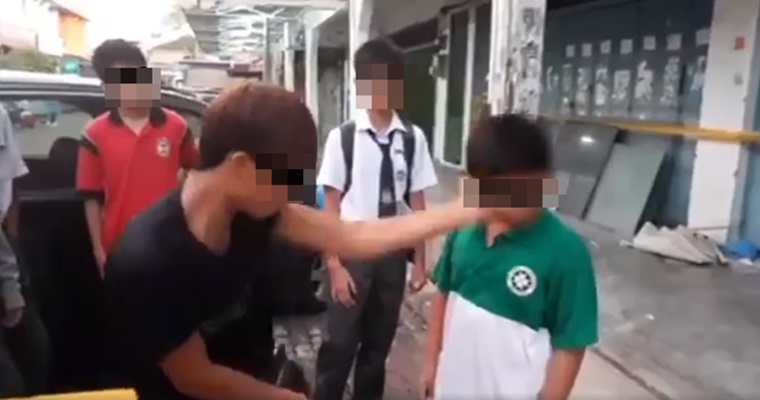 In a video that was uploaded on social media on 17 April, 5 teenagers (around the age of 16 years old) were seen to have surrounded ONE 13-year-old student. Reports have mentioned that they were kacau-ing the boy and kept telling him to take his glasses off. One of them even pushed him on his shoulders, but he was told off by one of the teenagers. Then, this 16-year-old boy came slapping him with full force, leaving a mark on his cheek. OMG kesian! Imagine how much it would’ve hurt!

According to SinChew, this 13-year-old boy studies at a secondary school in Taman Megah Ria, Johor.

The 16-year-old’s father apologised on Facebook, asking the public for forgiveness.

“Dear “Facebook Gods”, please forgive my child! He was already expelled from the school before this incident! Regarding this issue, I have also tried to educate and explain to him, and I hope everyone can give him another chance! A child’s mistake is their parents’ responsibility, he only stepped on the wrong path! Please give him another chance! He’s stopped studying and currently working every day, so he doesn’t have a lot of chances to meet his ex-schoolmates! As his father, I want to apologise to everyone, and I hope he can be given a chance to change. Thank you all!” He even asked to be given some time and promised everyone an update, although he didn’t describe what the time needed is for.

Hopefully the 16-year-old boy learns from this incident and becomes a responsible person, and also the poor 13-year-old victim to be able to heal from being bullied.

It is sad that school bullying is not uncommon, and usually victims are too afraid to report to the authorities, or even worse, their reports are ignored!

So, keep your eyes on your friends, nephews, nieces, children etc., and always create a safe space for them to open up to. Don’t let bullying go unheard.

Also read: Study: 8 out of 10 Malaysian Children Encountered Bullying in School Every Day