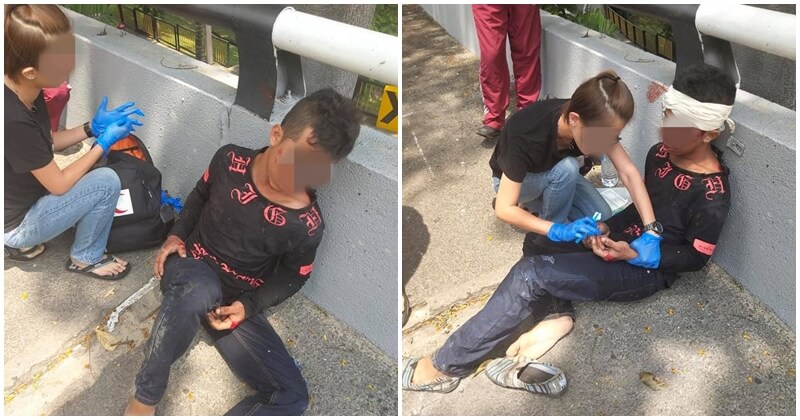 Sometimes the littlest of gestures make the biggest impact, and it is always a good feeling to hear or witness acts of valour that best demonstrates racial and religious harmony, a compassionate society and a demonstration of good neighbourliness in Malaysia.

Such action was witnessed first-hand by a netizen, whilst assisting a teenager who was involved in an accident on Jalan Loke Yew.

“God lives among us.”

Those were the words uttered by Mohd Farouk, as he witnessed a fellow Malaysian citizen helping out another, who was involved in a motorcycle accident, providing emergency response to the profusely bleeding teenager.

Taking to Facebook, Farouk writes “Just now, right in front of me on Jalan Loke Yew heading towards Viva Home, a teenager fell off his motorbike and was bleeding badly.”

“I called 999 and requested for an ambulance.” “While waiting for the (ambulance) service, this sister dropped by, opened her bag and started helping.”

He explained that the Good Samaritan was a Chinese lady and the teenager was a Malay boy. “Other few good souls was also there to help. She managed to stop the bleeding until the ambulance arrived.”

Glad that there were others who were able to look beyond race to help another, Farouk had a message for the unknown heroine, “Sister, I really do not know you but I do believe that a good soul like you will always be blessed by God.” At the end of his posting he emphasized on the importance of looking beyond the colour of our skin when it comes to helping one another.

Doesn’t that sound good? We believe that this showcases the best of what Malaysians can do.