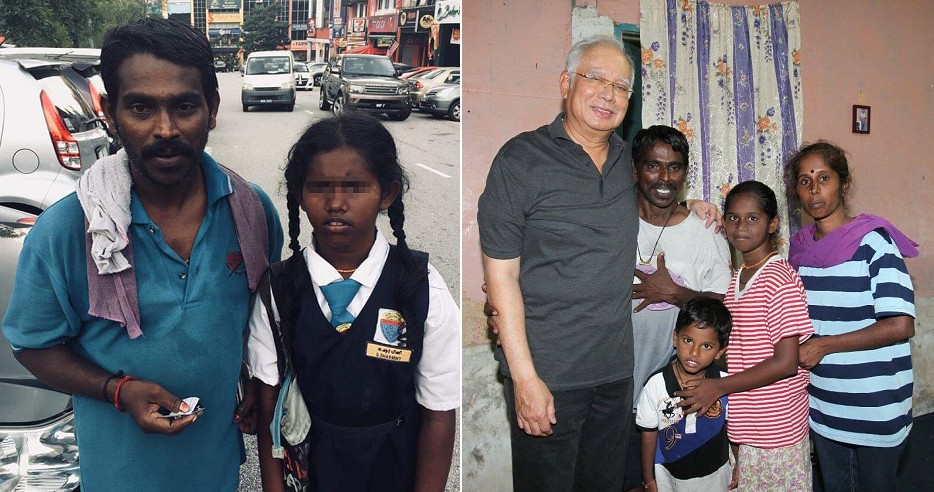 In case you missed it, this story of S. Sukumaran Sanmugam who washes cars so he can buy his daughter some school books went viral last week. The whole nation was devastated when they heard his story and tried to help him, including our former prime minister Datuk Seri Najib Razak.

Now, the Pekan MP has recently revealed on social media that he has taken the effort to visit Sukumaran and his family at his humble home. After his visitation, he took Facebook to share some information about Sukumaran, which he learned whilst he was there. He wrote in his post,

“I would like to bring attention to his unfortunate situation and I hope people would help him.” Najib further wrote that Sukumaran has limited abilities due to an accident that happened in the past. So, that is why he now makes a living by washing cars at Seksyen 9, Shah Alam’s parking area. He mentioned that Sukumaran doesn’t have a fixed price for his service; instead, customers can pay whatever amount they want.

Najib revealed that Sukumaran used to work as a security guard but he left the job because the contract ended. On top of that, the Pekan MP said that he was sad when Sukumaran shared that he used to sleep in the bus stop because he didn’t have enough money to rent a house. “I understand that he’s stressed about the increasing cost of living and the lack of job opportunities. Thus due to this hard life, his daughter doesn’t have enough money for school.”

“I am no longer a prime minister and I cannot instruct government agencies to help. Still, I’m an MP who gets a little salary from the Parliament. I know my small contribution will not help him greatly but I hope it can ease his suffering a little.” Before he ended his post, he urged the public to go to Sukumaran’s carwash spot at Seksyen 9, Shah Alam if they ever need to wash their cars. He also advised the public to pay an appropriate price, if possible more, to Sukumaran and not just as little as RM1 because it isn’t right.

Well, we definitely hope that the Pekan MP’s contribution will ease Sukumaran’s burden. In the meantime, as suggested by Najib, if you decide to use Sukumaran’s car wash services, remember to pay him an appropriate amount!