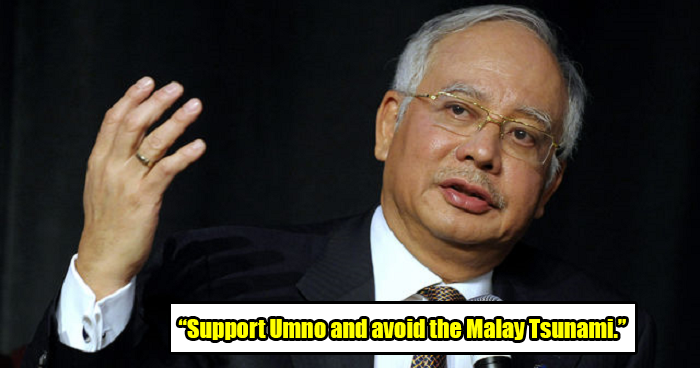 Just recently, our Prime Minister, Datuk Seri Najib Tun Razak, had imparted some words of wisdom to fellow Malaysian students, especially those under the Majlis Amanah Rakyat (MARA) scholarship, in regards to GE14.

The Star reported that Najib advised MARA students to “support Umno and avoid the Malay Tsunami”. This is because MARA students’ well-being has been protected for as long as Umno was in power. Najib, who is also the president of Umno, said that MARA students should trust Umno because only they can protect the future of these students.

“It is important that no Malay tsunami will happen in GE14,” he said to almost 5,000 people that attended the “Saya anak MARA” assembly at the Malaysian Institute of Aviation Technology (MIAT) UniKL on Sunday (15 April 2018).

FYI, the Malay Tsunami is a term that was coined in 2015 by opposition’s (DAP) strategist, Lim Chin Tong, when he predicted a shift in the Malay community’s voting ‘pattern’ because a majority of them started supporting the opposition parties instead of Umno.

Najib then proceeded to remind the students that many Malays and bumiputras have benefited from the scholarship. According to him, their lives took a positive turn because of MARA. Well, there’s no doubt about that!

Besides that, he urged MARA students to continue supporting Umno and asked them to ignore people who try to defame the government. Haters gon’ hate! He also promised them that being a MARA graduate will also benefit their grandchildren if Umno remains in power. Benefits for a whole generation!

“As long as Umno is in power, MARA will continue to exist. That is because the fight for MARA was in line with my late father’s struggle and I will continue his work,” explained Najib.

Fun fact: MARA was an initiative started by Najib’s father and Malaysia’s second prime minister, Tun Abdul Razak Hussein, in 1996. It was an effort to boost bumiputras’ participation in trade and industry, and to raise their socio-economic status under the New Economic Policy.

Well, that’s a pretty a big statement to make, especially with GE14 just around the corner. What do you think of our beloved PM’s statement – is it appropriate or has he taken it a bit too far?