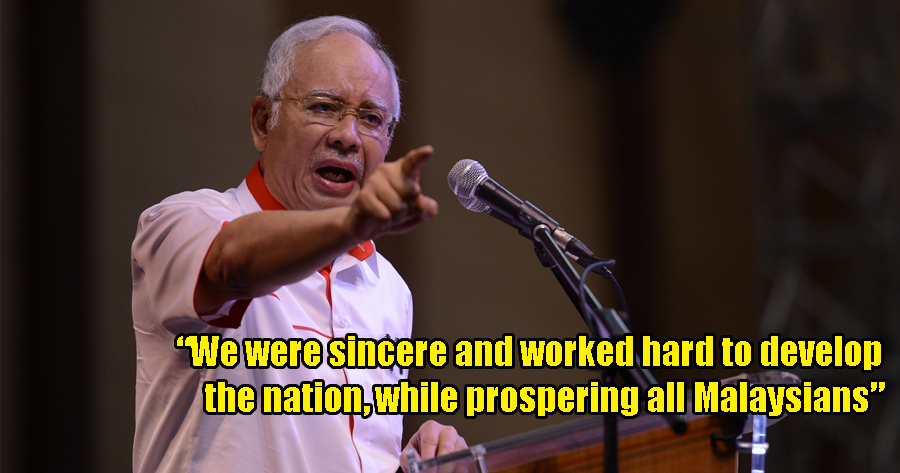 Yesterday (April 16), Najib once again posted on his Facebook page saying that he has never pointed fingers at the previous government for any problems that he encountered when he was the prime minister of Malaysia, reported The Star.

“We were sincere and worked hard to develop the nation, while prospering all Malaysians. Whenever there were problems, we fixed it. We didn’t point fingers,” he said. The Pekan MP then listed nine problematic legacies his administration had to deal with, which included solving biased independent power producer deals and repurchasing PLUS and placing it under the government, and EPF.

He mentioned that BN had also started 1Malaysia People’s Aid (BR1M) and finding funds for Felda, which he said lacked the allocations to provide welfare of ageing settlers and replant crops. Najib said that Malaysia was given the title of the world’s longest running bull market and that it reached its peak in May last year (2018) just before GE14.

He added that the share market value rose from RM600 billion to RM2 trillion when he was prime minister and that “a large sum of the RM1.4 trillion wealth gained during that time was shared amongst the people”.

Najib said he regrets that he had never wrote lengthy articles like this when he was leading the country, in fending off and fixing claims made by PH, and said that it was mostly because BN was preoccupied with making the National Transformation Plan (NTP) a success, which eventually led them to lose in GE14.

“We lost in GE14 because many were convinced by the lies that Malaysia was heading towards bankruptcy, even though the reality was otherwise,” he said.

What do you think of Najib’s statements? Let us know in the comments below.