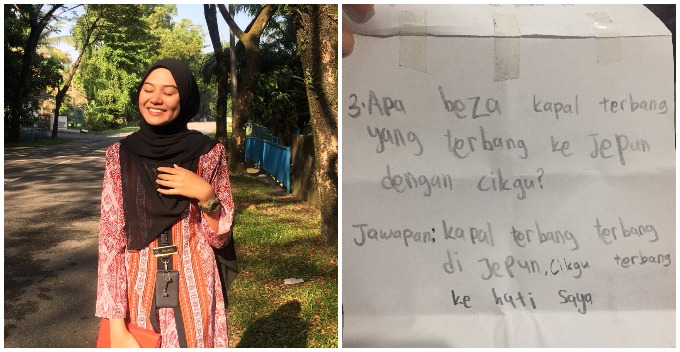 Ah, young love. We all have experienced crushing on someone when we were younger. It could’ve been our classmate, a totally random stranger, or even our teachers! The good old days when things weren’t complicated.

When it comes to these kinds of crushes, most of us just keep it to ourselves because the feeling is usually just a short moment of infatuation.

A viral tweet tickled the hearts of netizens that was shared by Twitter user @zulyqhakifle. She detailed receiving a love letter on her final day of practicum at a primary school. This kid really got guts weh.

The boy really has a way with words, especially with his totally creative and original  pantun. The pantun surprisingly rhymes and is pretty pun-ny, despite the bahasa rojak and multiple spelling errors. But hey, it’s the effort and thought that counts, right!

That said, he didn’t just write pantun, but the wordsmith-in-making also wrote some riddles! Whooo, so creative la this boy!

Oh, and before ending any sort of letter, it’s customary to include words of gratitude to the reader for the time spent reading it, and the boy did just that! Creative, pun-ny, and even polite!

Whoa, he even referred to himself as ‘abang‘ inside the letter!

Apparently, according to an interview with mStar, this was not the first time that the teacher-in-training had received love letters. In fact, the 20-year-old has already received a total of 15 love letters from the two primary schools that she did her practicum in since March 2019. Wow! Some people can’t even get one love letter in their whole life.

“I didn’t take it to heart. It’s normal that these kids just want to be happy-happy and have fun. Besides, I have an interest in being a teacher as I really love kids,” she said.

Aww, this is so cute. Crushing on someone is fine and all, but don’t get carried away with the infatuation and don’t forget to study too!

Also read: Passenger Tries to Hit On M’sian Lady By Passing Her a Love Letter Through AirAsia Cabin Crew