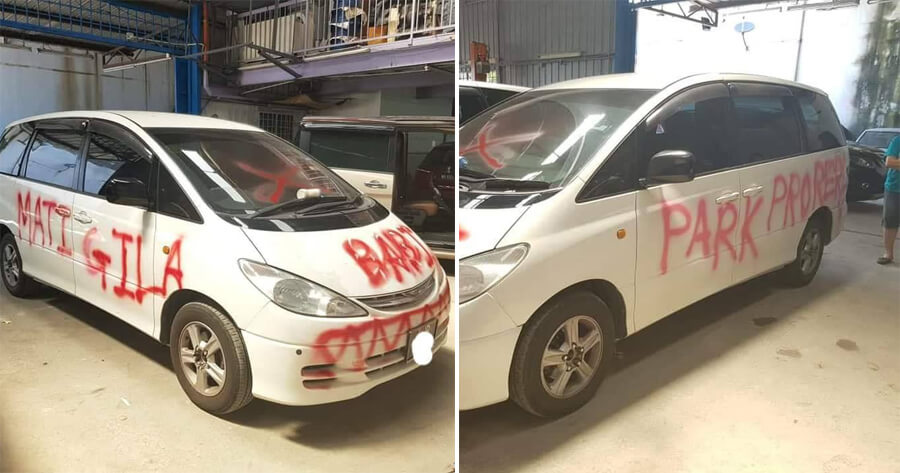 Malaysians are infamous for our parking skills and it’s absolutely absurd that some of us can get away with the countless times we’ve left our cars half-jutting out of an actual parking space, or just simply double parking without leaving a number on the dashboard. This poses a problem to other drivers as it blocks the road, obstructing the free flow of traffic.

If you’ve been in this situation before, I’m sure you would have loved to release your frustration on the obstructing car, hoping it would send a clear signal to the owner not to park in that manner ever again. Well, you might feel a sense of satisfaction if I told you that someone actually had the guts to vandalise a car that had not been parked properly. On 18th May, a Facebook page called Mcclubz posted several photos of a white minivan that had been vandalised with red spray paint by an angry person in Kuala Lumpur. The minivan driver had apparently parked improperly, which caused other motorists to be dissatisfied as it obstructed traffic.

According to Malay Mail, the driver returned to his car only to find, to his horror, that his precious white van was used as a canvas, bearing the words “Mati” (Die), “Gila” (Mad) and “Park Properly” written all over it in large fonts. The time and location of the incident is unknown, but Autonion body workshop in Taman Wahyu, Kuala Lumpur confirmed that the minivan had been sent there for body works.

The Facebook post went viral shortly after it had been posted with over 1,400 shares and over 200 comments from netizens with different reactions. Some applauded the vandal for his actions and agreed that the car owner deserved to face such consequences for parking improperly, while others deemed the vandal’s actions inappropriate and unprofessional.

“While it may have very sensitive graffiti and not too Malaysian, the message is clear: zero tolerance to indiscriminate parking,” a user said.

“Be a responsible driver, your selfish convenience can cause extreme inconvenience to others.”

What do you think of this vandal’s actions? Was it appropriate or was it a bit too much? Let us know in the comments below!

Also read: Sabah Library Just Opened A Week Ago But Kids’ Section Forced to Close Due to Vandalism