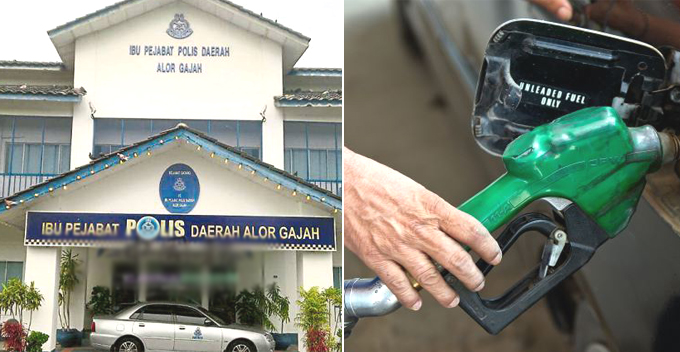 Recently, a policeman attached with the Alor Gajah district police headquarters was shockingly found to have been pocketing over RM1 million from submitting fake reports last year. This incident has pissed off Malaysia’s top cop who instructed a thorough investigation on this case.

According to China Press, the corporal working under the Strategic Resources and Technology Department was assigned to record the amount of fuel pumped by police patrol vehicles in the district. It was understood that an officer from every state and district police headquarters will be stationed at designated petrol stations to handle the refuelling of police vehicles in their respective areas. The officer in charge of “petrol money” will have to oversee the refuelling process and jot down all the details.

Besides that, the officer is also in charge of the distribution of “petrol cards” which are normally issued to cops who’re travelling across many states for investigations or ferrying suspects over long distance.

So, in 2017, the corrupted corporal submitted false records of money spent on fuel, which caught the attention of his superior. The fake data stated that RM2.07 million was spent on pumping petrol but a check in the system revealed that only RM689,296 was actually spent on fuel. Means he ‘makan’ the remaining amount! In other words, the corporal had pocketed nearly RM1.38 million last year! When his superior asked him for the official receipts from the petrol stations, he couldn’t produce any proof. Also, he was found to have hidden 38 petrol cards where 17 of them have been used but no record could be found.

An investigation team has since been set up to probe this case further and will report to IGP Tan Sri Mohamad Fuzi Harun. Apparently, this system is so open to abuse that it has been done for the longest time. Another police officer told China Press that he once travelled from Johor to Penang to investigate a case and when he requested a petrol card from the officer in charge, he was asked to give RM50.

This made him very angry and disappointed. Refusing to bribe the officer, he ended up using his own money to pump petrol.

It’s certainly shocking to see how corrupted certain cops are. Also, this procedure should be reviewed and replaced with a more effective system since it can be abused so easily!