Anthony Bourdain has famously said: “Its taste can only be described as… indescribable, something you will either love or despise. … Your breath will smell as if you’d been French-kissing your dead grandmother.”

Yup, you guessed it.

Love them or hate them, durians are called the king of fruit for a reason. They’re so powerful that they’ve sent an entire library in Melbourne on lock down!

On Saturday 28th April, hundreds of students were evacuated from a Melbourne library as they thought that there was a gas leak! Firefighters wearing breathing apparatus were called in to investigate the cause of a pungent stench.

According to reports by The Straits Times, firefighters were called to the RMIT campus on Latrobe Street just after 3pm when the smell of gas was reported in the building.

Approximately 500 students and teachers were evacuated by Victoria Police as a precaution while an investigation was launched into the source of the smell, because the building was known to store potentially dangerous chemicals.

After a thorough search throughout the building, firefighters found that the smell had not been from chemical gas, but was in fact generated from the infamously smelly fruit, which had been left rotting in a cupboard.

First of all. EXCUSE ME? WHO ON EARTH WOULD LEAVE A DURIAN LYING AROUND LONG ENOUGH TO ROT?! And secondly… The library? Apa maksud…?

The durian is known as the smelliest fruit in the world and has been banned from subways and aeroplanes around the world, even in our very own hotels. Whoever left it in the closet, wasn’t too pandai lah. Durians usually have a shelf life of three to six days when kept at room temperature, so for it to smell like a gas leak, it was probably in the closet for way longer.

A Metropolitan Fire Brigade statement said the smell had moved around the building via the air-conditioning system, but by 6pm the building was reopened and firefighters returned to the station.

After this incident, I’m pretty sure visitors at said library can expect a new sign: 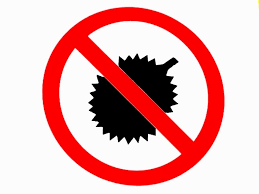 Also Read: You Can Now Beautify Your Face With the Scent and Shade of Musang King Durian