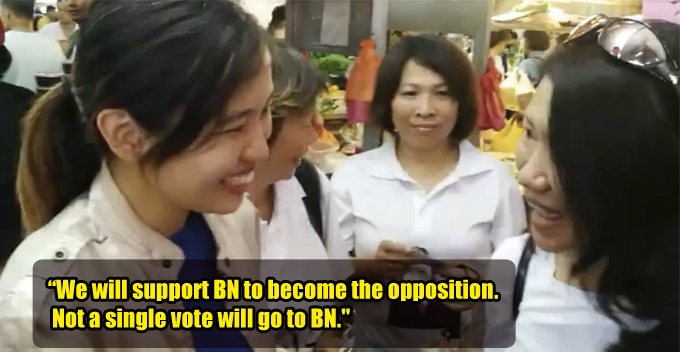 With GE14 just around the corner, all candidates from their respective political parties are trying their best to woo the voters’ support, but this particular woman didn’t give face one particular candidate.

Over the weekend (April 2018), MCA’s Cheras candidate Heng Sinn Yee went to Yulek market to greet the locals. Clad in a blue BN T-shirt and jacket, she walked through the crowd with a smile on her face and shook everyone’s hand. However, a woman who’s not fond of BN, shook Heng’s hand and said in Cantonese,

“We will definitely support you. We will support BN to become the opposition. Not a single vote will go to BN.”

Things quickly became awkward as on-lookers also agreed with the woman, but Heng just continued smiling and moved on. The encounter was uploaded on Facebook and it quickly spread like wildfire. The opposition supporters cheered the woman for being brave in saying those things to Heng’s face.

Responding to the video, Heng posted on her Facebook wall saying,

“Since when a woman bullying another woman is considered a hero? A Chinese insulting another Chinese is seen as a warrior?”

“Thank you for the person who set the trap and the person who recorded. Your actions have only strengthened my resolve to fight DAP’s culture of bullying and hate.”

So, was it really a case of bullying? Here’s what netizens said on her wall.

“If you can’t take criticism, please don’t be involved in politics. Also, that woman was just voicing out her dislike towards BN, and not towards you,” a netizen said.

“It’s good that you’re up against the culture of hate and bullying, but that woman was just telling you that she is not a fan of BN, so don’t take it to heart,” another Facebook user said.

Well, at least Heng took the harsh truth thrown at her face like a champ and didn’t blow up at the scene right? Watchu guys think about this issue?

Also read: Zouk May Be Permanently Moved Out of Titiwangsa If PAS Wins the Constituency