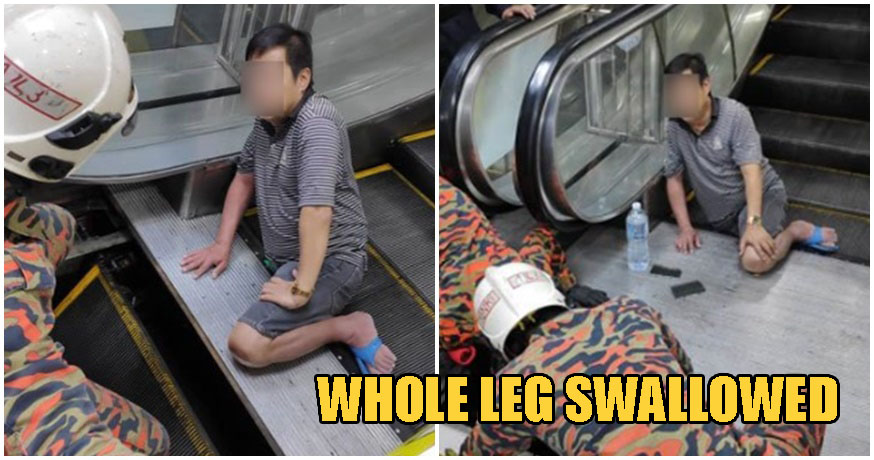 If you needed even more reason to be extra cautious when you’re using the escalator, then this piece of news reported by China Press and The Star Online will be all you need to watch your step on these seemingly mundane machines!

In another horrifying instance of what can go terribly wrong on escalators, a man’s foot wound up being sucked into an escalator here in KL just yesterday (3rd November 2019). The incident, which happened at a mall along Jalan Tuanku Abdul Rahman, was said to have happened when the 49-year-old man’s slipper got caught near the landing of the escalator. As you probably know, slippers are by far some of the most common culprits for incidents like these happening because of how slim they are. If you don’t notice where you place your foot, your slipper will almost certainly get pulled in as the escalator steps disappear into the landing.

Which is exactly what happened to this poor man when the escalator mechanism looked to have almost completely dragged his right leg from the thigh down into it! The local Fire and Rescue Department said they received a call from the public at around 10.01am and rushed to the scene immediately. Operations commander Mohd Zuhair Faisal Zulkifli mentioned that it took almost one hour to properly remove the man’s trapped leg from the escalator itself. Medical personnel who were attending to the incident said that the victim suffered a broken foot and was promptly sent to Kuala Lumpur Hospital for treatment. He is reportedly in stable condition. Whew.

But in any case, we have to caution all our readers to be extra careful when you’re taking the escalator, and always remember to observe the rules! They’re there to keep you safe after all!