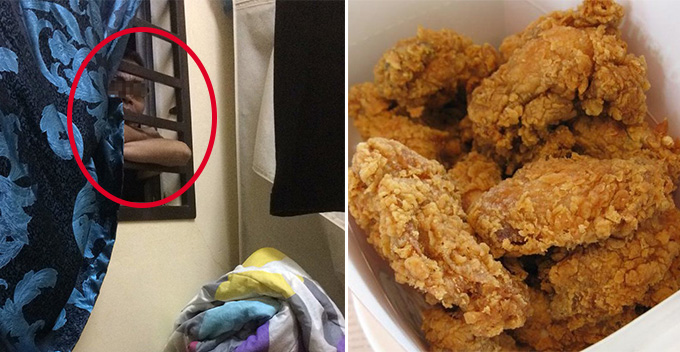 An unwanted guest when you’re home alone? Nope! No, thank you!

Well, that’s what happened to a Twitter user, Syafiq when a man peeped through his room window to, uhm, just have a chat. He shared this with his followers last Saturday (15 December).

In his tweet, he stated that this particular man has been sneakily spying on him and his roommates for a while, and he would do so from his home which is situated directly opposite theirs. Coincidentally, Syafiq was home alone at the time as his roommates were out for a dinner event. Hence, the man took his chances to finally approach him. He claimed that the man even attempted to invite himself in to sleepover. What?! The man insisted that Syafiq let him in and nervously, Syafiq replied by saying that he can’t let him in as he would have to ask for his roommates’ permission first. The man then casually asked him to call them so that he could come in!

What’s even more mind boggling was that the man even tried to bribe him with fried chicken because he desperately wanted Syafiq to open the door and allow him in. So creepy!

In the thread, netizens expressed their thoughts and concerns. One said, “If he, as a guy, was scared that this happened to him, imagine how girls would feel,” while another questioned, “He offered fried chicken? Does he think you’re a child?”. You can listen to the audio here:

It’s not worth risking your life for that fried chicken!

What would you guys have done if you were in Syafiq’d position? Share with us in the comments below!