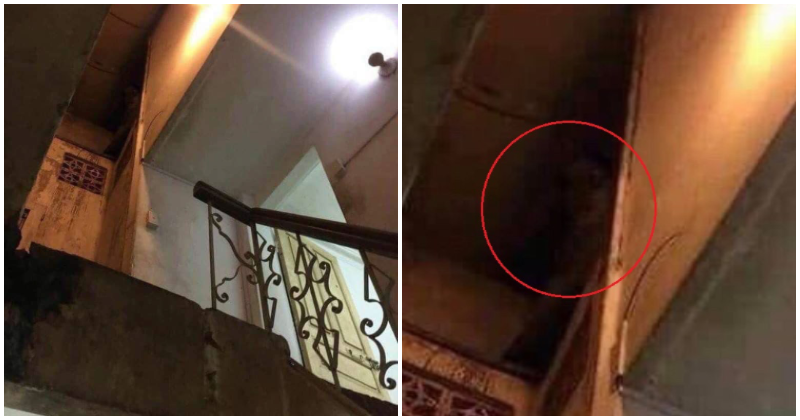 What would you do if you found out that the hostel you used to stay at when you were a student turned out to be haunted?

One man in Thailand saw an image that was circulating social media of the top floor of a creepy hostel with what looks like a ghost poking its head out of a hole in the wall, and realised that it was the same hostel he had lived at when he was still studying.

Wuttichai Songthanawut took to his Facebook page to share the image and his experience living at what looks like the world’s scariest hostel in a now-viral posting.

Wuttichai wrote, “I just found this picture, I didn’t take it myself. But it reminded me of the past. It’s the old dormitory that I used to rent from a kind-hearted grandma, 15 years ago.”

He went on to explain that the girl in the room across from him who worked the night shift refused to tell him who stayed in the room before him. And that’s when the weird incidents started happening to him.

“For 500 baht (RM67) a month, the room was not scary. The walls were freshly painted and the bed and sheets were new and clean. It was located on the fourth and top floor, so it had a good view but there were weird smells. But that’s okay, I can live with it,”

“The night I moved in, I had a dream that someone was standing at the doorway looking at me. Her hair was long and I couldn’t see her face. I started waking up in the middle of the night since then. There would always be sounds of footsteps on the stairs and the sound of bells from an anklet. It always happened around 1am, so I knew my housemate from across the hall was at work.” He also experienced loud, aggressive knocking on his door at night.

“Some nights, there would be strong knocks on the door, like someone wanted to open it. But I was afraid and didn’t bother opening the door. I knew it wasn’t my friends or family because I didn’t tell them where I was staying. I thought maybe someone had gotten the wrong room but there was always no one around,”

“One day, when my girlfriend was supposed to come over after her classes at 4pm, I was taking a nap when I heard a knock on the door. Thinking it was her, I got up, only half awake, to open the door. My eyesight was blurry but I saw a woman standing there, she walked into the room and disappeared into the bathroom. I was wide awake then.”

Unsure of what to do at that point, Wuttichai did the only thing he could think of.

“I prayed, I concentrated on the fact that I didn’t have anywhere else to stay, that I was a good person, that I had to earn my own living and that I was just there to study. After that night, the ghost never came back. The noises were gone.” Soon after that, Wuttichai finally managed to get the history of the place out of the girl from across the hall.

“According to my housemate, before I moved in, there was a couple staying in the room who always used to fight. They would sometimes resort to violence, and would slap each other. They fought so often that eventually one day, the girl disappeared for 2 to 3 days. There was a foul smell coming from their room, so they decided to open it. The girl was hanging from the fan in the centre of the room while blood was all over the walls and bed,”

“My housemate was never afraid because she’s never there at night. No wonder the room had a fresh coat of paint, a new bed and sheets. But after I prayed, the ghost never bothered me again.”

We’re still not entirely sure what exactly happened to the girl who haunts the hostel, but we’re glad she wasn’t vengeful and took Wuttichai’s prayer well.

Wuttichai’s posting has since garnered over 47,000 shares.

I wonder if people still actually stay there considering how scary the interior looks. That alone should be a clear warning that the place is haunted.

Also read: Did You Know Gardenia Products are Sold For Almost 3x the Price in Sabah and Sarawak? Here’s Why