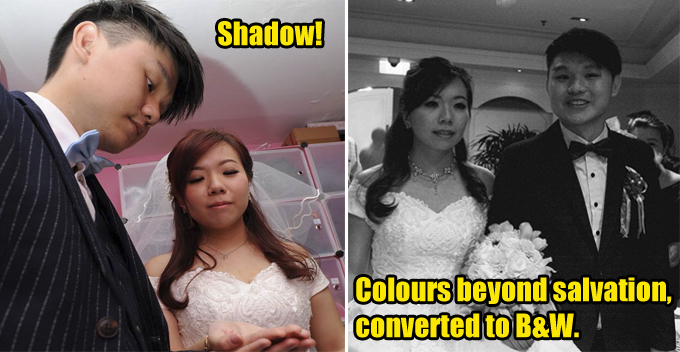 You had one job, photographer… one!

A netizen named Ivan took to Facebook on 15 August to share how the photographer he hired for his wedding day screwed up all the shots. Some of the photos were so bad that even Photoshop can’t save them!

“It was supposed to be a happy and memorable day yet it turned out to be full of disappointment. We paid S$2,700 (approx. RM8,000) for their 3-in-1 package which included photography, videography and a photo booth.” “Where is the focus? The background too? The photographer/editor didn’t even bother to do anything about it” | Source: Facebook “I’m lost for words. I have to convince myself that this is the style of the photographer.” | Source: Facebook He was clueless as to how the photos could turn out this way because all the photographer ever said during the photoshoot were “Oh good!”, “Nice shot!” and “Next!”. When he saw the wedding album, he was completely mind-blown by the atrocious photos as 90 per cent of the outdoor shots were overexposed.

“Our brothers and sisters spent almost two hours under the scorching sun and that was the outcome we’ve gotten. Are all these over-exposed photos good? We can hardly see our faces. We can’t even see our bodies clearly. We literally look like ghosts!

“We travelled all the way to the flyer and took photos with the stairs and railings. Our sisters were asked to pose the “trendiest pose” with their faces blocked like nobody’s business.” The photos were so dreadful that even the chief photographer couldn’t accept it but instead of apologising, here’s what the chief said:

“I haven’t seen the photos. They are okay, what’s the issue?”

“This is the first time we (have) encountered such feedback.”

Oh my, did he ruin the previous wedding photos as well?

Desperate to cover up their incompetence, the company had the audacity to criticise the subject (which were Ivan and his wife) and the environment for the substandard photos.

“Most of the deemed ‘okay’ photos were those from the gatecrashing and tea ceremony which focused mainly on everyone else other than the newlyweds.”

That kinda defeats the purpose of hiring a wedding photographer, right?

“Most of the ‘couple-only’ photos were emotionless. There wasn’t even any reminder for us to smile for the camera. We recalled what the chief photographer said, ‘We neglected the fact that we have to give quality photos rather than quantity’,” Ivan wrote. “Did not even bother to remind us to smile. All photographer did are snap and move on.” | Source: Facebook “There is nothing vintage about this. Photographer converted it to black and white because the colours cannot be saved anymore.” | Source: Facebook “What kind of professional lighting and angle is this? Flash from the bottom with shadows behind.” | Source: Facebook For the picture above, one netizen pointed out that the uncle behind was photobombing the couple.

The photography service provider did claim that they’ve put in their best efforts to edit and salvage the photos. But if everything from the angles to lighting was done right in the first place, no extensive editing would be needed, right?

The disappointed couple has come to terms with the outcome, saying “What is done cannot be undone”. The post was merely a reminder to others who are looking for wedding photography services.  “Open your eyes, choose with care,” he warned.

For more pictures and the name of the wedding photography service, check out the original post here.

What’re your thoughts on this? Any comments from any pro photographers out there?