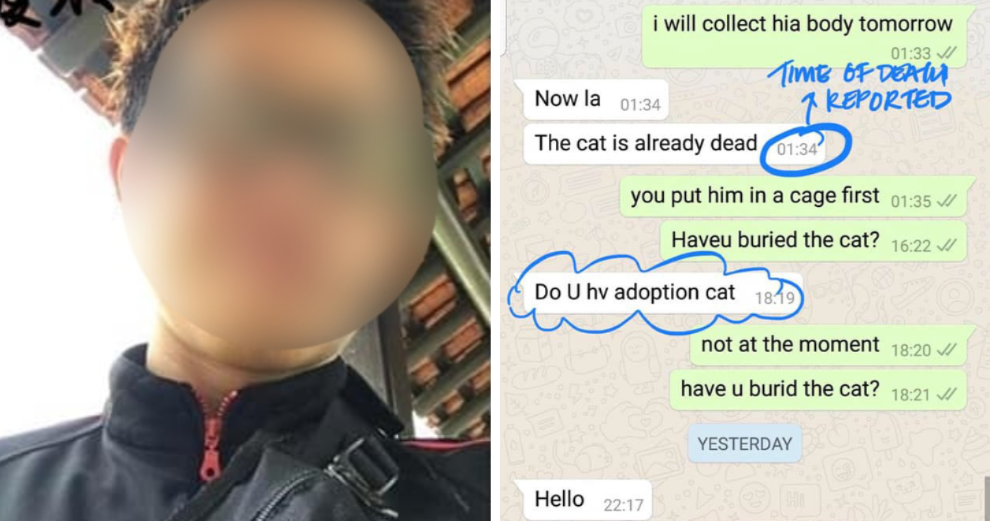 Do you know what kind of people are the worst kind? Animal abusers.

They say serial killers all start off as animal abusers, and if that’s the case, we’ve found not only a potential serial killer, but also a sexual predator, all in one person.

KH Lee, who fosters kittens and cats in Singapore, has taken to the Cats and Kittens For Adoption in Singapore Facebook page to warn the community about an animal abuser who has been going around adopting cats, but could never ‘keep them alive’. “I was approached by this sicko for my fostered cats, and he’s sick to the core for sending me a picture of his d*ck! Refer to screenshots of my conversation with him. I’ve already reported him to the police.” “I also learnt from others that he had allegedly caused the death of an orange cat he recently adopted.”

The orange cat had apparently died less than 48 hours after being put in his care even though it was very healthy when he adopted it. He had then sent a photo of the dead cat to its original rescuer, where it looked wet and had bloodied paws.

“I suspect that the cat was drowned and had its nails pulled out,” added KH. “Before the cat passed on, he had called the rescuer to let them know that the cat was sick. When the rescuer told him to send the cat to the vet, he refused. He then extorted money, initially 400 SGD (RM1,208), from the rescuer but raised it to 1,000 SGD (RM3,022) when they had begged him to return the cat. A while later, he informed the rescuer that the cat had passed on and had refused to disclose the location of the body.” He was apparently also caught on CCTV trying to steal a community cat from Chinatown, Singapore.

KH’s main purpose of sharing the post was to ensure that no other rescuer and cat would have to deal with him, as he is still looking for kitty victims on Facebook groups. Let’s hope no other kitty falls into the hands of such a sick person.

Also read: Watch: Heartwarming Moment Sabah Paralympian Gets Out of Wheelchair to Save Tiny Kitten Stuck in Drain