Malaysian Kuan Chee Heng is no millionaire but he has a heart worth my weight in gold. That’s a lot of gold, btw!

Chee Heng may seem like your average joe, but this man always gives whatever he can to help the less fortunate. His kind heart hadn’t go unnoticed as netizens are touched by his volunteer and charitable works.

One of the first time he went viral was when he help a big family ‘buka puasa’ and fed their 8 starving children.

“8 children living with their father and mother. Living in darkness as the electricity and water supply have been cut off. It’s already 8.30pm and they still have not broken fast because there’s nothing that can be eaten. I invited them all over to eat. We need to help them for they are in desperate need.” As the president and founder of Community Policing Malaysia Association, he also does nightly rounds in known crime hotspots and help out the community wherever he can.

Though his deeds, such as helping pay for people’s electric bills or buying them food, may seem small but these kindness he gives mean the world to these people who are in need.

He came to the public light again when news of his personal deeds went viral, like that time he bought an old peddler a bicycle. Because need to peddle ma. 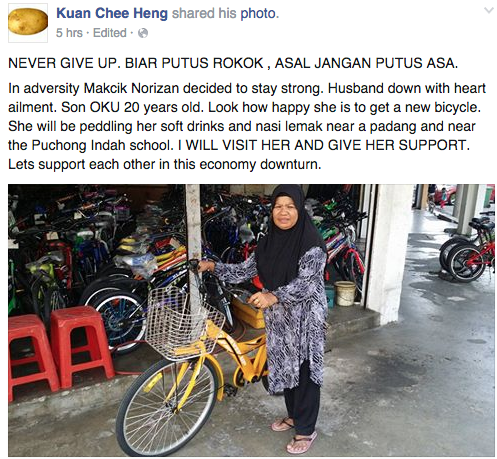 And that time he paid for a poor family’s electricity bill. He definitely lit up their world. 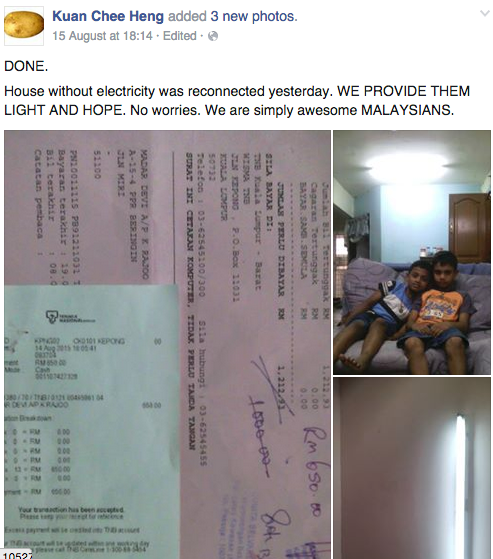 And when he bought food for a woman’s EIGHT children. He made sure all eight kids ate. 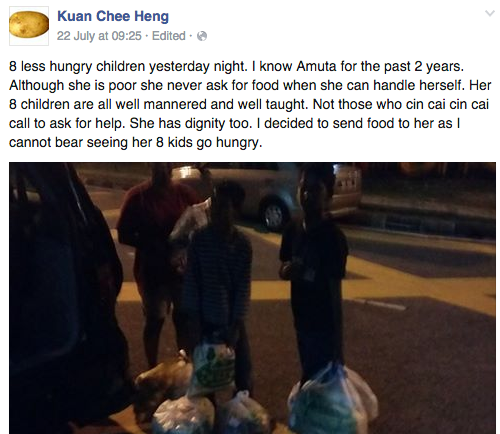 The man’s quite literally a godsend and Malaysians love him for that! Many netizens have poured in praises to him and he currently has over 121,000 followers on his Facebook! And if you follow him you’ll be able to see the TONS of good deeds he do.

There has even been several times he got stopped by people he had previously helped, so they could express their sincere ‘thank yous’ to him again! How touching! So what’s Uncle Kuan up to now? Well he’s actually trying to get some motorcycle paramedics together as first respondents to accidents where every second could mean life or a tragic story on the morning news!

Interested individuals could apply to him and you’ll obviously need to able to ride a bike and also have first aid training!

“I AM JUST A SIMPLE MAN. Life is short.” he wrote as his Facebook introduction. But this mere ‘simple man’ has inspired Malaysians out there, proving that you don’t need to be rich to make the world a better place. Doing small deeds and putting smiles on people’s faces are good enough, especially for those who really need it.

Kudos to you Uncle! Love, Malaysians.