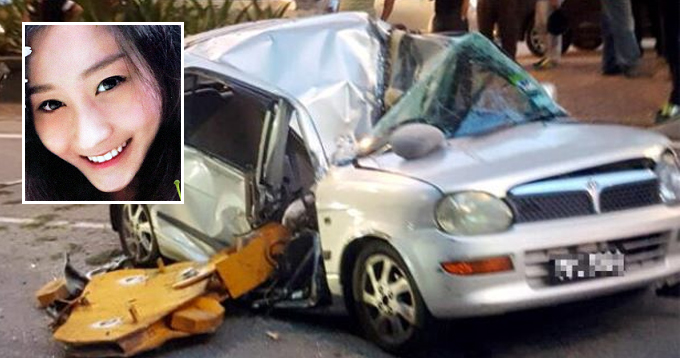 On 25 August, a lady named Chin Khoon Sing died on the spot at Bukit Bintang after a metal debris broke off from a crane and landed on her Perodua Kelisa.

The metal debris weighing a whopping 1,000kg fell off from the 20th floor of a hotel that was under construction. Chin succumbed to the injuries on her neck, chest and right ribs. Domain Resources Sdn Bhd was held responsible for this tragic accident. According to Oriental Daily, Judge Harmi Thamri Mohamad has imposed a RM40,000 fine on the company at Sessions Court. The judgment was delivered after considering public interest and the willingness of Hong Chuan, representative from the company to plead guilty.

The company was charged under Section 17 (1) Occupational Safety and Health Act 1994 which carries maximum penalty of RM 50,000.

Deputy public prosecutor from Department of Occupational Safety and Health, Intan Noorashikin Nasaruddin appealed to court to impose maximum fine on the company since they failed to provide safety guidelines and also multiple accidents had happened at the construction site before.

On the other hand, Domain Resources’ lawyer appealed to reduce the fine because the company has taken initiative to beef up the safety at the construction site and prepared a safer Standard Operating Procedure. Moreover, the company has also offered help to the victim’s family. The victim’s parents had stated not to take any action on the company as well.

The victim was on her way home that night to have dinner with the family before tragedy stuck. It was reported she was a week shy of her 24th birthday as well.

The judgment has been passed, but justice has not been fully delivered. It is sad to know that a human’s life is only worth a mere RM 40,000.

Also read: Young Woman Crushed To Death In Bukit Bintang When Part Of Crane Falls On Her Car