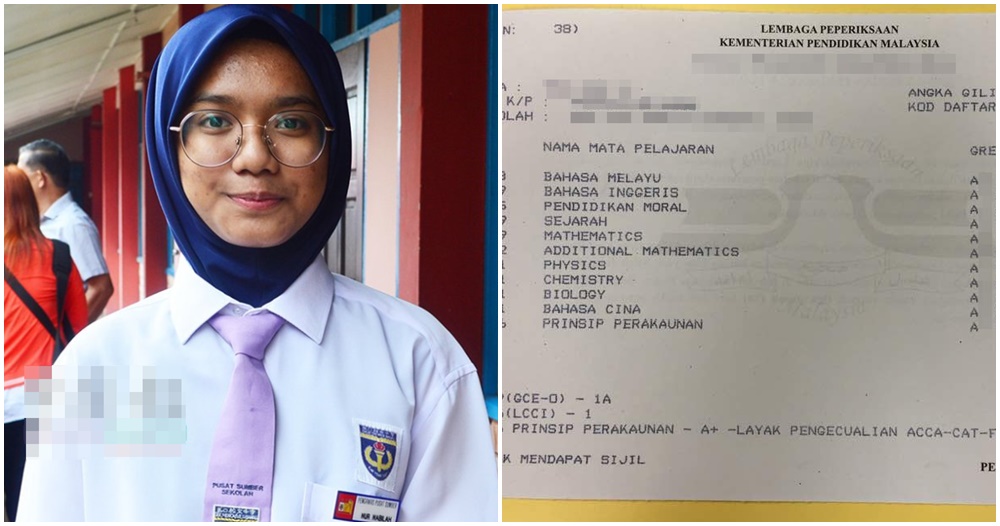 Recently, a Malay student by the name of Nur Nabilah made headlines for achieving fantastic grades in both her Mandarin PT3 and UPSR papers! Despite being Malay, the hardworking student says she has always been interested in learning more about the Chinese language and culture. However, the exemplary student admits that learning Chinese isn’t easy, and she’s had her fair share of struggles:

“You need to learn each character like its word for word. Some words have different meanings so if you use them in the wrong place in a sentence, it can make you look like a joke.”

“Probably the most difficult thing to do is writing Chinese essays and learning Classical Chinese comprehension,” Nabilah told China Press.

Nonetheless, the modest youth from Bahau, Negeri Sembilan said having Chinese friends to talk with really helped her throughout her learning journey. Her friends were the ones who introduced her to Chinese novels, which made her fall in love with the language. While the determined student has a good grip on Mandarin now, she admits that it wasn’t always this way. Being enrolled in Chinese school since Standard 1, she said she couldn’t understand a word of what was being taught in class.

But she soon realised the importance of Mandarin and gradually worked towards achieving her current level of proficiency, “It is good to know Chinese. I can communicate with Chinese friends and teachers in Chinese, write in Chinese and understand more than one language. It’ll improve my competitive ability when I go out to look for jobs.”

Even though Nuna’s Chinese grades are nothing short of impressive, she also keeps a clean record of straight A’s in her other subjects, having achieved 5A’s for UPSR and 10A’s for PT3! For illustration purposes only || Source: Education Malaysia For Students

The hopeful youth has her eyes set on SPM next as she says she’s planning on keeping up her perfect “A” streak.

All the best in achieving that dream, Nabilah!

Also read: “I’m Chinese but I like to berhijab”, Netizens Amazed By Chinese Non-Muslim Girl Who Loves Wearing Hijab