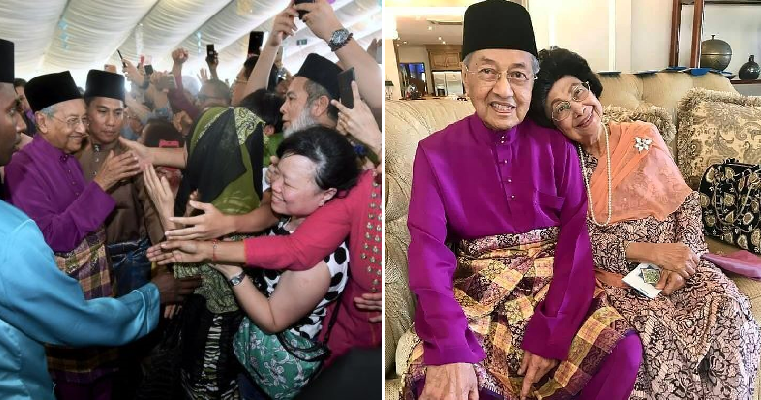 Raya is finally here and boy, our Prime Minister Tun Dr Mahathir Mohamad is really feeling it! Just yesterday (June 15) he said that he was moved by the overwhelming turnout at the first Pakatan Harapan-led government’s Hari Raya open house at Seri Perdana, Putrajaya. The turnout was so huge that Dr Mahathir had to apologise for not being able to greet everyone personally! The Star reported he said that he shook so many hands he was “afraid that his hand would fall off.” That certainly must have been a lot of handshakes!

Finance Minister Lim Guan Eng told Bernama that the large turn out for the open house shows the people’s genuine love for the country. Guests had started arriving hours before the event at Seri Perdana, with some of them even coming as early as 7am, two hours before the start of the event just to catch a glimpse of the seventh prime minister. It is estimated that about 80,000 people showed up at the open house. According to The News Straits Times, Dr Mahathir, who was clad in a purple baju Melayu, said many who shook hands with him thanked him for “saving the country.”

“Malaysians, regardless of race, turned out today, many in traditional Malay outfits. This reflects the excellent (multiracial) spirit of Malaysians. (It’s) a sign of a good future for the country,” he said in an address to the crowd here.

“Some said ‘I Love You’, however there are no more placards saying ‘I Love PM’. They did not bring them but they stood in queue, shook my hands and said ‘I Love You’,” he added, which caused guests to roar with laughter. Dr Mahathir humbly pointed out that he alone did not “save the country”, but cited “people power” and offered his gratitude to supporters of the Pakatan Harapan government despite obstacles thrown out by the previous government.

“This is due to democracy. People are free to choose their government. If it is no longer suitable or is outdated, you need to vote them out. We did not have violence, animosity or war (in the transition of power),” he said.

We’re glad that the new government, whose members have has been tirelessly working to revamp our country, are feeling the love this Raya!

Also read: Strangers May Show Up At Your Door with Your Pos Laju Parcel This Raya, Here’s Why