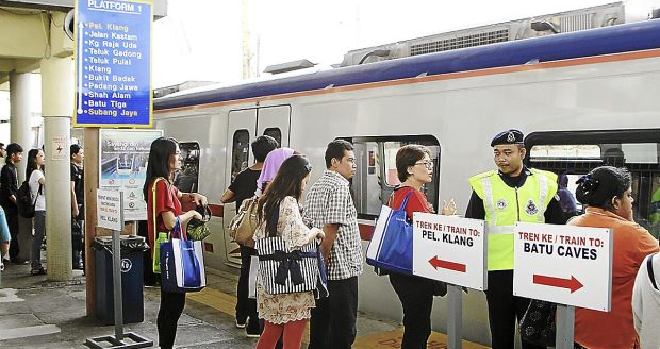 If you rely on the KTM to get around, then better take note, people! Starting from 22 December 2017 until 31 August 2018, the KTM Komuter will have a new train schedule as they are doing some upgrading works to the train tracks. According to The Star, this move is part of the Infrastructure and System Upgrading Project of Klang Valley Double Track, which started in May 2016 and is expected to be completed by November 2019. One track will be closed during this period, which means train operations will run on a single line. This disruption is expected to affect the KL Sentral and Putra station stretch and between Kuang and Sungai Buloh stations. Uh-oh!

However, a KTMB spokesperson said that they would be providing additional services to ensure that commuters experience minimal hassle. She said, “There will now be a direct route from Port Klang to Tanjung Malim without having to switch trains at the Sungai Buloh station. There will also be a shuttle train for the Batu Caves-Seremban/Pulau Sebang (Tampin)-Batu Caves route.” Meanwhile, if you’re taking the shuttle train to Sentul station instead, there will be a free shuttle bus service to ferry passengers to KL Sentral or Sentul LRT station. Do take note that this service is only available from Monday to Friday, though!

Of course, many commuters who depend on KTM to get to work or school were disgruntled with the changes as this means that their regular timings would be disrupted.

One of them, 40-year-old Faiza Guntur said, “I work in the Bukit Bintang area. I take the train from the Seri Setia station to Kuala Lumpur station and walk to the Pasar Seni MRT station to take the MRT to Bukit Bintang. Although there are other alternatives, this is the cheapest route.” “Starting tomorrow, there is no direct train to Kuala Lumpur station if I board the train at my usual time. I usually board the train between 7am and 7.03am to reach Kuala Lumpur station at about 7.23am. The new schedule states that the closest time of departure for me is 7.06am, which is fine but the train stops at KL Sentral station. So instead of walking to Pasar Seni MRT station, I have to take the LRT from KL Sentral for RM1 to board the MRT to Bukit Bintang,” he added. Devigaa Sivalingam, who is a student says that her travelling time has now doubled as she needs to take the train from Klang to KL Sentral to attend classes in Brickfields. “Usually it takes me an hour but now I think it will be two hours. I am just afraid I will end up going to class late. Some of my classes end at 5pm, so typically I would reach Klang around 7pm and reach home an hour later. But now, I think I will only reach home by 9pm or even 10pm,” she said.

You can log on to their website here for more info or check out their new schedules here.

These are the new schedules: Remember to adjust your schedules accordingly, people! You don’t want to be late for work or school!

Also read: These Roads Around the Klang Valley Will Be Closed Until 2018 Due to MRT Works