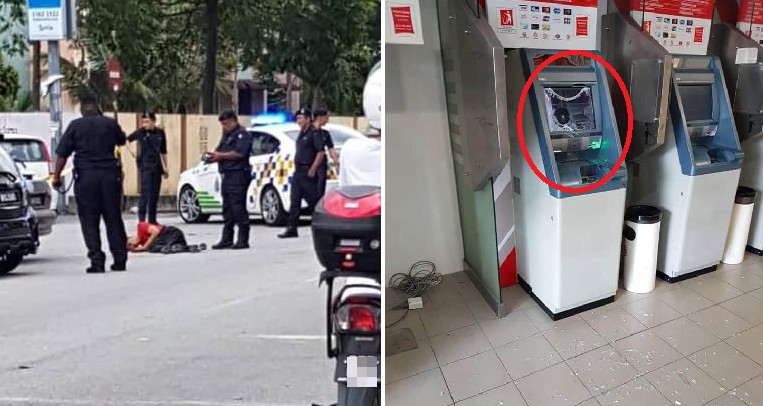 Wow, this is quite an overreaction! A 41-year-old man went berserk and attacked an ATM at the Public Bank branch in Bandar Bukit Tinggi, Klang. He allegedly did so because he was not able to withdraw money from the machine. According to China Press, the incident happened near a school in Bukit Tinggi today (April 2) while photos and videos had circulated on social media. It is believed that he had tried to withdraw money around 12.30pm but was unable to, which was when he flew into a rage and smashed the screen of the ATM.

His antics caught the attention of other people and a police report was made shortly after. Harian Metro said that when the police arrived, the man had already left the scene. However, he told the bank’s security guard that he would come back at 2pm and if he still could not withdraw money, he would be furious. At 2pm, the police came back and sure enough, he was standing in front of the bank while holding a knife. He continued to rant to them about the issue again, even when they tried to calm him down for 20 minutes. Based on the reports, he suddenly got aggressive and chased one of the policemen across the road while trying to stab him.

In the video, another police officer runs up to provide backup just as the man reaches his partner. The policeman then pulls out his gun and fires four shots at the man and for a moment, it looks as if he had missed. The man tries to run away but doesn’t get very far before he collapses on the floor, due to the two gunshot wounds he had sustained. Klang police have confirmed the incident and said that the policeman shot the man because he feared that his partner would get hurt. The injured suspect has been taken to the hospital for further treatment and the police said that it is not a case of bank robbery but they will have to confirm the details later. A seven-inch knife and a bag of what is believed to be drugs were seized from the suspect. The case will be investigated under Section 307 of the Penal Code.

He should have asked for help from the bank staff nicely, instead of taking it out on the machine!