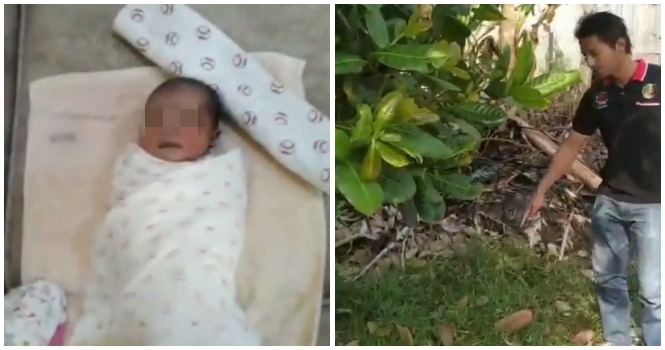 An unexpected incident has shocked the villagers of Jalan Dusun Muda, Kota Bharu and none of them saw it coming.

A newborn baby girl with her umbilical cord still attached was found at a grassy area near a place where some of the residents usually burn rubbish, reported Harian Metro.  This incident happened today (22nd July) near Jalan Dusun Muda, Kota Bharu, Kelantan. The baby was found by some villagers at 8.10am and they believe that the baby was newly born because there were traces of blood all over her body.

According to a witness, Mohd Norazam Che Wahab (age 31) he became aware of the poor baby’s location when he let his cat out for a walk.

“Suddenly my cat started running and I chased after it, worried that it would get lost,” Mohd Norazam said.

“However, my cat stopped at a place and that was when I heard sounds of a baby crying. I thought the sounds were from a kitten but when I followed the direction of the sound, I saw the baby,” he continued.

“I immediately ran and called out for a neighbour to come pick up the baby. Another neighbour’s kid called the police,” he added. Mohd Norazam claimed that one of the neighbours saw a car stopping near the location where the baby girl was found.

His neighbour was not suspicious of anything until the baby was found. According to Utusan Online, the baby was sent to Raja Perempuan Zainab II Hospital, Kota Bharu, for further medical examination. The police are now involved in the investigation and the Chief Officer of Kota Bharu district, Assistant Commissioner Abdul Rahim Daud verified that further investigation is still ongoing.

It is hoped that the baby girl will remain in a healthy and safe condition. The perpetrators should be brought to justice for endangering the poor baby’s life and the villagers should be praised for their quick actions.

Also read: This Loving Cat Mum Tries to Protect Her Kittens from the Heavy Rain with Her Body