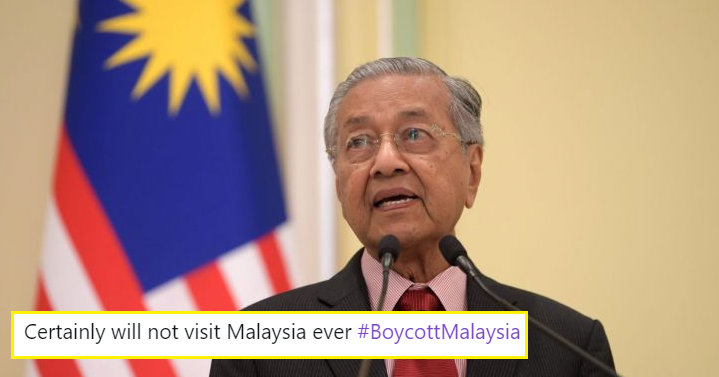 This seems a bit bizzarre…

#BoycottMalaysia seems to be trending on Twitter, and we were, honestly, baffled with the hashtag when we first discovered it. So, we did a little digging and we discovered that the hashtag started to trend because of Tun Mahathir’s statements about the situation in Jammu and Kashmir.

In the midst of tweeting about the mistreatment against Rohingyas in Rakhine State and Palestinians in their own country, Tun M used Jammu and Kashmir, which a state in India, as an example to further strengthen his argument but unfortunately, that ticked off the netizens in the wrong way.

The helplessness of the world in stopping atrocities inflicted on the Rohingyas in Myanmar had reduced the regard for the resolution of the UN. Now, despite UN resolution on Jammu and Kashmir, the country has been invaded and occupied.

Following that tweet, Tun M suggested that India should “work” with Pakistan to solve the issue peacefully. He reckoned that failure to solve the problem peacefully will lead (and has led) to the “disregard for the UN and the Rule of Law”. Nevertheless, Tun M’s statements did not sit well with some netizens, especially netizens hailing from India.

His statements on the state of Jammu and Kashmir, as well as his comment on this issue between India and Pakistan, agitated Indian netizens which led to the trending hashtag, #BoycottMalaysia.

Many of the tweets urged other people to not visit Malaysia and suggested that they should opt to visit other Southeast Asian countries. You can read some of the tweets below: Not only that but it appears that the netizens are also hellbent in boycotting Turkey as the country’s leader shared the same sentiments as Tun M. On top of that, some netizens are also accusing Malaysia of supporting terrorism. What do you think about this accusation?

What are your thoughts on this issue? Let us know in the comments below!