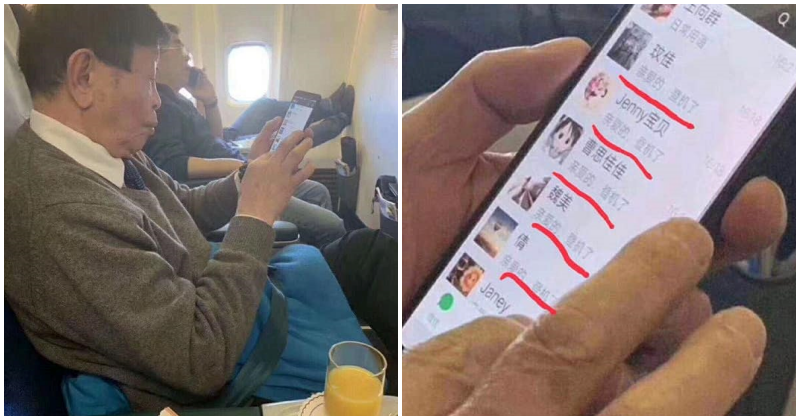 After the launch of the Huawei P30, people worldwide can’t stop talking about its incredible 50x zoom in function that keeps images still clear and crisp. I mean, it even became a meme!

And boy, those memes really do NOT get old! Here’s one of our fave: Well, a recent amusing post shared to a Facebook group illustrates, yet again, Huawei P30’s amazing camera feature. It’s technically not a meme but it definitely is hilarious.

“Today I’m on a plane testing out my newly bought Huawei P30, and that’s when I realised this pro!”

By “pro” the guy meant the elderly man who’s busy on his phone.

A closer look at his phone shows that although seemingly in his late 60s, this man is quite the charmer 😉 On the phone, it can be seen that the man is talking to at least 6 ladies, some even being given the nickname “baby” and “wawa”.

Netizens jokingly commented warning how you should be wary of your surroundings next time you check your phone or read your messages.

Others gave their respects to this man for being such a playa!

Some netizen also pointed out that the guy said the photos were taken by his new Huawei P30 but the post was sent via iPhone instead.

Well, who knows? Maybe the guy was reposting these series of photos from another source. Anyway, with the Huawei P30 out there now, do be careful when you check your phone in public though! 😛