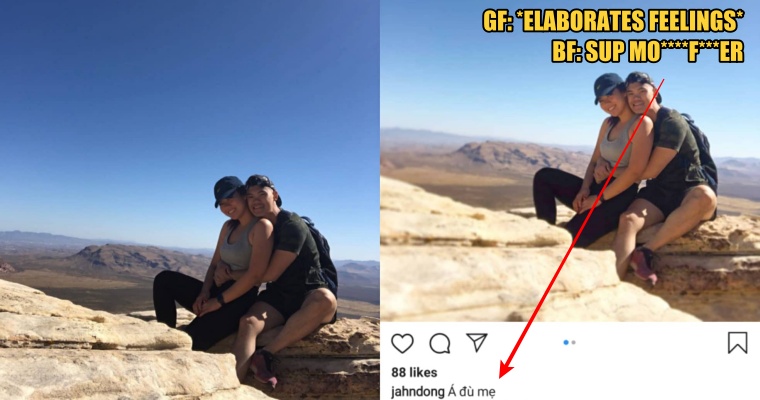 Men are from Mars, and women are from Venus. Men and women’s brains are proven to think differently, but sometimes we’re still taken aback by how different we actually are.

A post surfaced today (13th October) on a Facebook group, Subtle Asian Traits, where a Vietnamese girl made a hilarious comparison that illustrates the difference between her boyfriend and her perfectly.

Apparently, Zoe celebrated her birthday a couple of days ago and she went hiking with John, her boyfriend, at the Red Rock Canyon in the United States. On that very day, the couple posted the exact same photo to their respective Instagram accounts, and Zoe poured her heart and soul while she thanked her boyfriend in her Instagram caption. “I’m so thankful to spend my 23rd birthday with this amazing man. We met each other in such an odd situation, never thought we would make this far. I’m so happy to have you in my life, no words can describe how much. You are very special to me.”

John, on the other hand, wrote a rather short caption in Vietnamese (which Zoe helped translate for the internet):

We actually thought that Zoe requested John post the photo, so we reached out to her for more details.

Zoe proceeded to explain to WORLD OF BUZZ that John was the first to post the photo, and he asked her why didn’t she do the same. She only found out about his caption later, which then left her wondering why he didn’t put in more effort in writing his caption. When asked about it, John told his girlfriend that he “didn’t know what’s better to say”.

Although she isn’t blaming him, she still wonders why he can’t write something nicer since it was her birthday. That said, regardless of what he writes for his captions, his love for her is still there.

We girls totally feel you, Zoe. Can’t blame men for being more simple-minded than the ladies. ¯\_(ツ)_/¯