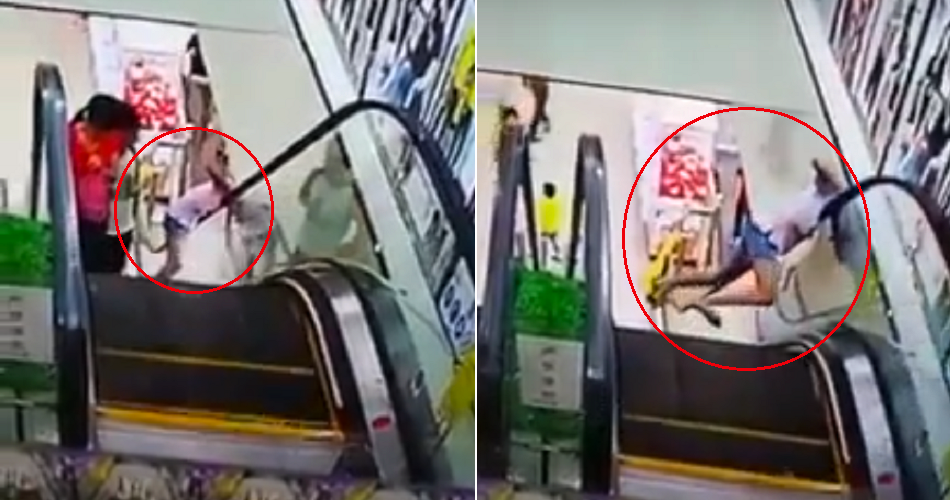 The multitude of escalator horror stories will always serve as a reminder to us that we should be careful when using them. However, it looks like these stories don’t really deter many people from playing around on the escalator despite the multiple warnings we have received.

This girl in a shopping mall in the Jiangxi city of Jingdezhen, China decided to fool around while she was on one and almost broke her neck when she was going up the escalator. Don’t play play man, it’s not a playground! Shanghaiist reported that the little girl could have injured her neck seriously because she was leaning over an ascending escalator’s handrail. Please do not attempt this, guys!

The video, which has been recirculating among social media users recently, showed the girl getting her head stuck halfway up the escalator and had no one to rescue her even though there were many passersby during the incident. However, she managed to struggle and break free after a few heart-stopping moments. Thank goodness!

After the accident, a report further revealed that the girl suffered injuries in her ear as it was bleeding badly. Ouch! Hopefully, she gets treated ASAP. You can watch the dangerous incident here (viewer discretion advised):

In June, another horrific escalator incident was reported whereby a little boy lost his foreskin because his penis got caught in between the gaps of an escalator when he tripped over. The boy was reportedly wearing open-crotch pants during that incident. Thankfully, the boy’s injury was not life-threatening after he went for a check-up at the hospital.

It’s clear now that we should always follow any warnings or precautions while on the escalator to avoid dangerous incidents like this from happening. Remember to always be careful while descending or ascending the escalator!