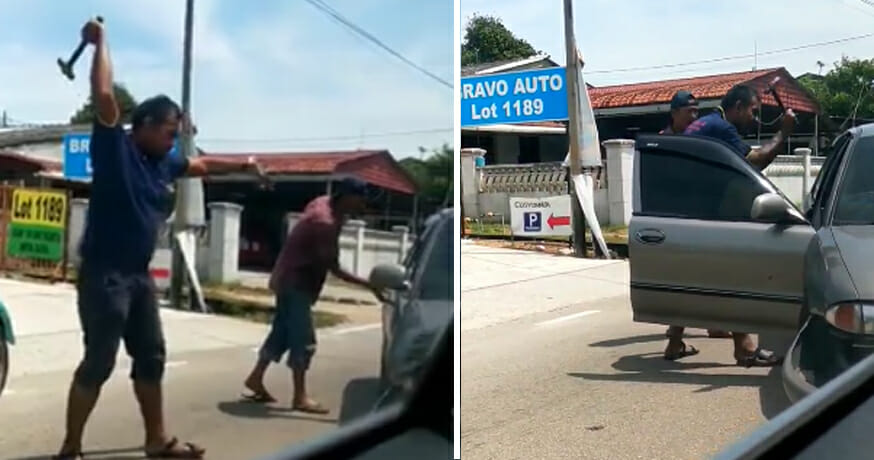 Road bullies are still rampant in our society, and we would definitely not want to run into one!

Recently, a minor accident happened when a car collided with an incoming lorry at a junction in Johor Bharu on January 29. Unhappy with the damage caused from the collision, the driver of the lorry appeared wielding a hammer in his hands, and threatened to smash the car with it, China Press reported. A video clip of this incident was uploaded by a local netizen on Facebook and soon garnered the attention of other users. In the caption of the video, the netizen said,

“The car was making its way out of the clear junction, with the lorry still far behind. However, this road bully sped up and crashed into the car intentionally upon noticing the car driving out midway. This is seriously a lunatic in Johor Bharu!”. The lorry driver was recorded lifting his hammer while yelling at the driver of the car in an aggressive manner. An accomplice of his can also be seen knocking on the window on the driver’s seat and opened the door.

The lorry driver can then be seen going up and shouting abuse at the driver of the car, leading to a heated argument between the two of them.

Watch the whole incident below:

Let’s hope the authorities are looking into this and that swift action is taken against this dangerous road bully.

Remember, road rage is never the way to solve any accident, guys!

Also read: Foodpanda Rider Kicked Off His Bike and Punched in the Face by Angry Road Bully