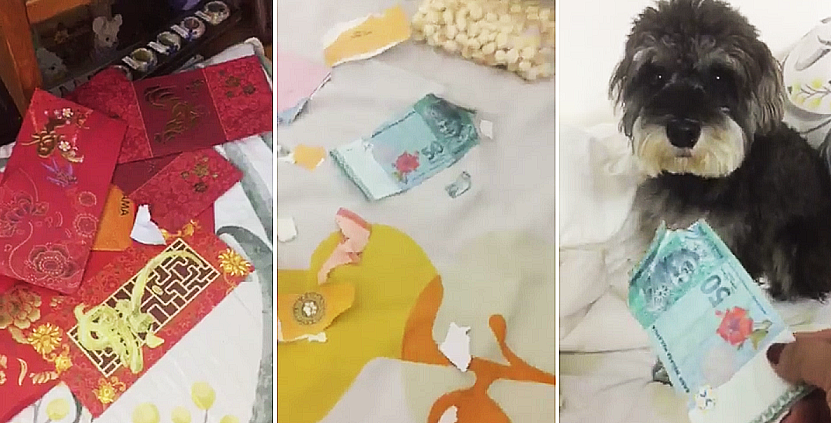 It’s the festive season for the Chinese as we ring in the new year. And one thing significant about the new year besides the family reunion is the ang pao!

Well, in less than a day, a recent video uploaded to Facebook garnered over 14,000 shares!

The video shows money and red envelopes strewn across the owner’s bed. Worse, the red envelopes were torn… along with the Ringgits inside of it! The footage eventually shows a very guilty looking dog by the pillow. The Schnauzer known as ‘Charcoal’ was sitting still as it got sounded for its wrong doing.

“Look what it’s done! It opened the angpaos by itself!” the dog owner was heard saying to another person.

“Very smart ah you? Explain yourself!” the owner scolded her dog.

“Look at this RM50 note! Look, it’s torn! Tell me did you eat it??” the owner breaks out into a small laugh. “You opened the angpao by yourself huh? When I’m not home you open the angpao yourself? [You’re] very clever right?” “Ask yourself, are you naughty or not?” the owner asks cheekily.

The adorable video gained over 1 million views, and while most people found it to be hilarious, other netizens did not feel the same way.

“For those who wrote the negative comments, if you have a dog then you’ll know that scolding them is like scolding a child/little sibling. We are just teaching them. Anyway, Happy Chinese New Year everybody!” another user wrote. Of course, no worries because the owner loves her babies very much and Charcoal (and its sibling Oreo) is A-Okay!