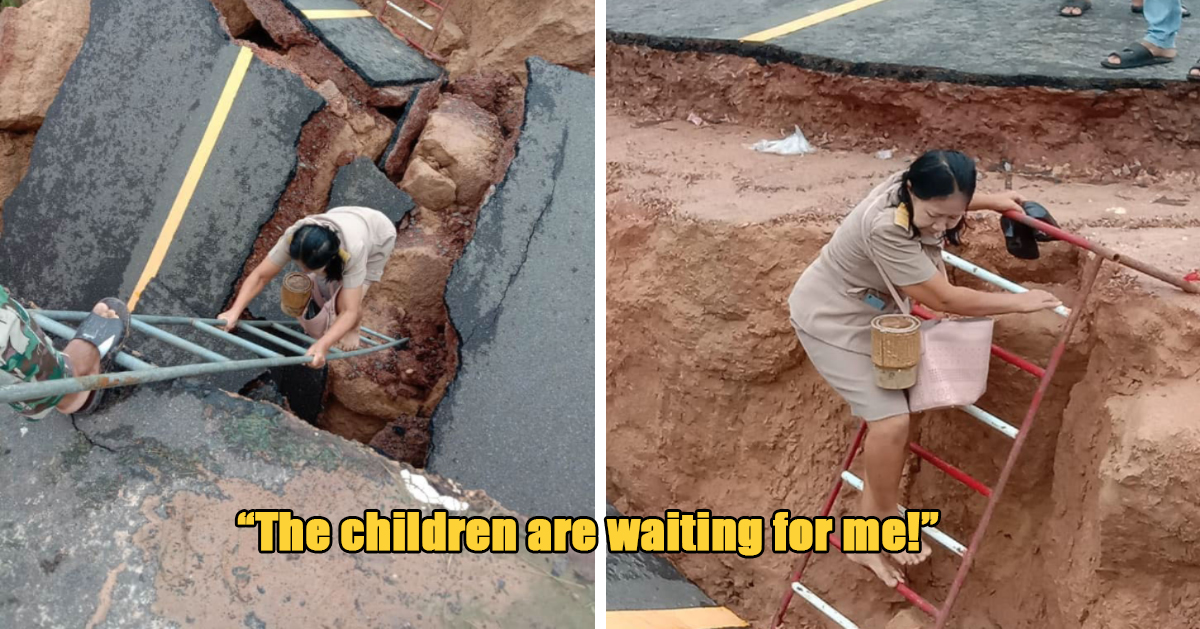 More often than not, we tend to take for granted the nurture and dedication of teachers in our lives. They sacrifice so much just to educate us for a better future. We really don’t deserve it!

This Thai teacher is no exception. Recently, a Thai Facebook user featured a dedicated female teacher crossing a dangerously collapsed road that was hit by a landslide in Na Udom just to make it to the other side so she could get to school.

The photos that were posted show the woman holding her shoes in one hand and a bag filled with teaching supplies in the other as she carefully makes her way down a steep decline barefoot, using only a barricade used as a makeshift ladder as her source of support. What a brave woman! As captured in the pictures, chunks of the broken road pieces protruded from the eroded soil, which made it difficult to navigate across the destroyed street. According to Thai Residents, there was at least a 5-meter gap she had to cross to get the other side. The only way to cross over was to climb down the eroded soil. Nonetheless, the teacher pressed on!

The scene was photographed by netizens who shared her story on the Internet. According to Guanghua Daily, many have praised the teacher’s sense of responsibility and commitment to her job.

The determined educator said she had to get across no matter what as the children in the school were waiting for her, and she needed to teach them.

The road ended up in such a state because the province of Na Udom had only recently been hit by the Podul Tropical Storm. This has caused flooding to occur in certain areas of Thailand, which led to soil erosion and landslides, blocking off roads typically used by citizens to make their daily commutes. In the midst of all this disaster, it’s good to know that some heroes still fight to carry on with their lives as best as they can. Kudos to this teacher for giving her 110%!