We go to our favourite restaurants to have a good time, but this is probably not the good time these customers were expecting! A restaurant in Perak is currently under investigation by police and the Ministry of Health, after customers reported experiencing hallucinations!

Suspicions arose when a policeman reported feeling weaker than usual and started hallucinating, not long after dining at the restaurant in Teluk Intan. According to Berita Harian, police then formed a team of operatives the morning after, and subsequently detained a cook and two of his assistants, one of whom is a foreign worker. Following the release of their urine test results, it was confirmed that they tested positive for opioids.

At the same time, ingredients such as sauces, fried chicken, vegetables and rice were seized by the Hilir Perak District Police Headquarters, and sent to the Department of Chemistry in Ipoh for inspection. Looks like there were no stones left unturned! A source said,

“The owner of the premise stated that his food do not contain any illegal substances; however, ingredients such as small amounts of poppy seed powder had been used by the cook.”

The news also went viral among WhatsApp users following a heavily circulated message, which alleged a police and three other individuals had failed a urine test after dining at the restaurant, and that the cook on the premises had been arrested. 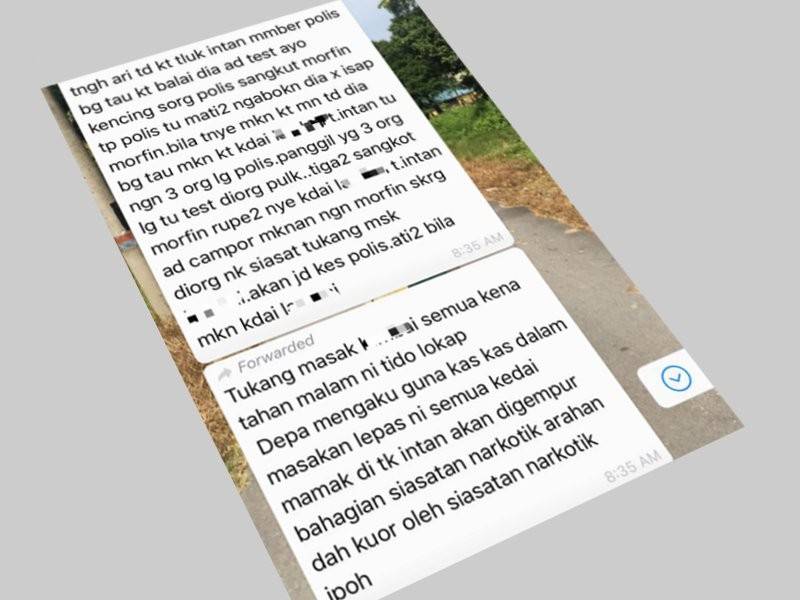 Sure looks like the suspects shot themselves in the foot, putting drugs in food at a restaurant that is frequented by police! Competition is tense in the F&B industry, but we hope this doesn’t motivate other restaurants to resort to similar shady methods.