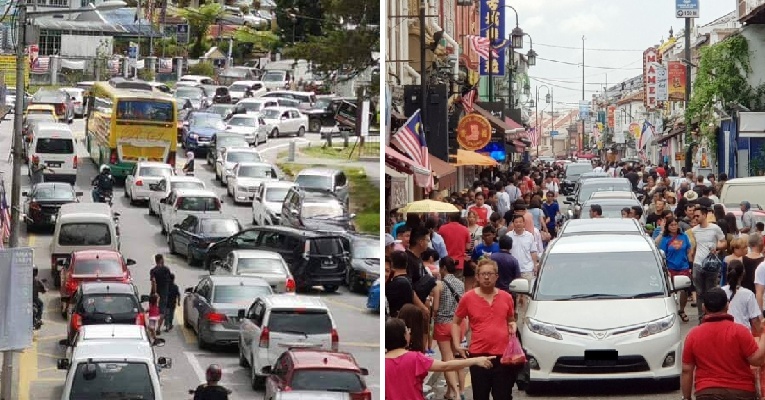 Malaysia recently experienced a rather rare four-day-long weekend, which caused employees everywhere to rejoice in their break from the daily grind. Although there were people who decided to travel overseas, there were also many Malaysians who took the opportunity to “Cuti-Cuti Malaysia”. However, if you opted for the “Cuti-Cuti Malaysia” route, you would’ve realised that this may have turned out to be a mistake especially in several popular tourist spots such as Cameron Highlands, Penang and even Melaka. According to Sinchew, the worst traffic jam apparently took place in Cameron Highlands as people wanted to take a break from the humidity to enjoy the cool air up there.

Plus, it doesn’t help that there is only one major road in Cameron Highlands to accommodate the influx of about 10,000 tourists. The congestion did not let up even during the night as people were stuck in the slow-moving traffic as shown on Facebook posts by some of the disgruntled people. If you were one of these unfortunate people, you would definitely know the feeling!

Just take a look at the massive crawl! Meanwhile, in Melaka’s Jonker Street, people were walking along the tourist attractions and cars had a hard time trying to get through the streets. Local residents said that they had to stay at home to avoid getting stuck in the congestion as well. As for Penang, long queues formed at the famous eateries and hotspots such as Bukit Bendera as everyone wanted to get a taste of the popular food and go up the hill to get a bird’s-eye view of Penang. Looks like we really take our holidays seriously to fully utilise them!

Were you one of the people who got stuck in the heavy congestion at these places? Share with us in the comments section!