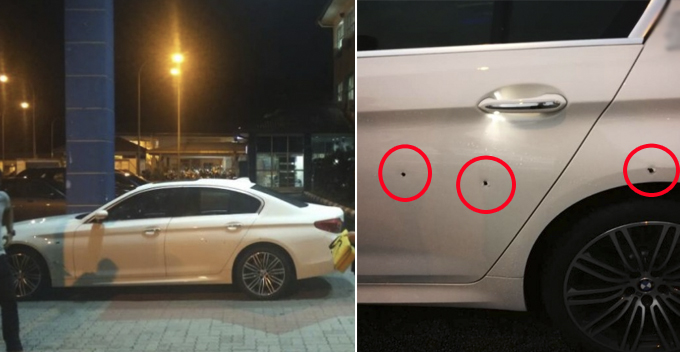 Honestly, where do all these people get their guns from?

Recently, a gunman blatantly fired three shots at a businessman’s car right in front of a traffic light during peak hour. This shocking incident happened at Jalan Rasah, Seremban on 21 April. As reported by Utusan, the 46-year-old businessman had pulled over at a traffic light in his white BMW at 6.30pm. That’s when a motorcyclist armed with a pistol fired three shots at the rear passenger car door. Luckily, the businessman was driving alone and no one was sitting in the back seat.

“When he stopped at the traffic light, he heard a few explosion sounds coming from the back of his car. He then saw a man wearing a black jacket and helmet holding an object believed to be a pistol.”

It was raining at that time and the shooter fled the scene right after. The victim then proceeded to the Seremban police station to lodge a report. It was reported that the businessman specialises in importing and selling lorries, and his business is prospering. Therefore, he reckoned that someone might be jealous of his success and hired the gunman to murder him. Jeng jeng jeng.

He added that he has no enemies and never offended anyone. In fact, ever since his business took off, he has been sponsoring charitable events as well.

The cops will now look into this case from various angles and it will be investigated under Section 3 of Firearms (increased penalties) 1971.

Unfortunately, shooting cases have become so common in Malaysia. Let’s hope the cops can intensify their effort in flushing out the party that is providing guns to these hitmen.

Also read: Gun Used to Shoot Businessman in Neck Confirmed to Be Loaned by Two Cops