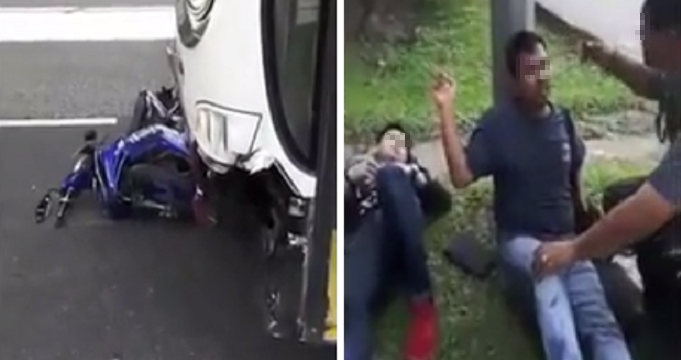 At about 11am on July 20, 2017, a terrible accident involving multiple motorcycles and a bus has left the whole of Singapore shocked, Stomp reported.

Videos of the SBS Transit bus ramming into the bikes and quickly driving off went viral on social media. The vehicles were all initially stopped at a traffic light.

The first video shows the moment the accident occurred.

A number of motorcycles were waiting for the light to turn green when the bus was just behind them. Out of nowhere, the bus suddenly moved, ran the poor motorcyclists over and then sped a bit further before eventually stopping a distance away.

Shocked by such a terrible sight in front of them, none of the vehicles moved even though the light had turned green. Surrounding motorists got out of their cars to help the men who were involved.

Horrifyingly, it seemed as though three people were dragged under the bus for a bit! The three men who were injured were quickly rushed to the National University Hospital (NUH), according to the Singapore Civil Defence Force (SCDF).

In another video showing the aftermath of the accident, the bus driver can be seen sitting in the driver’s seat while passersby aided the poor victims.

“Our priority is the well-being of the two injured motorcyclists and the pillion rider.”

“We were at the hospital that day following the incident and all three of them received outpatient treatment. We will continue to render assistance to them as best we can.”

“We apologise to affected commuters and road users for the inconvenience caused. Meanwhile, we are assisting the police with their investigations and the bus captain has been suspended pending findings.” Anyone with information or dash cam footage of the accident are highly encouraged to inform the police immediately.

For all motorists out there, please always be alert of your surroundings. Sometimes, we may be extremely safe and careful but others aren’t. So, we must be alert to avoid horrible accidents like this.

Also read: Malaysians Get Beaten Up Due to Queuing Misunderstanding at S’pore Immigration