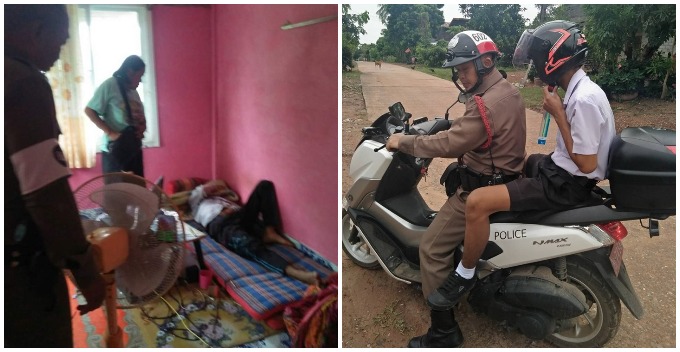 For most of us, waking up early in the morning for school when we were younger was one of the toughest things to do. This is especially true when it had just rained the night before. Being all wrapped up in a warm and toasty blanket while the outside environment is cool and chilly is simply the best feeling ever.

Thailand Police Story recently shared a post describing how this one grandma who was truly at a loss from her grandson refusing to go to school to take his exams dealt with the stubborn kid. And what action did she take, you ask? She called the police!

It was said that the grandma had pleaded to the police who were on-duty to persuade her grandson into going to school. When the officers entered the house, the boy was still cooped up in his bedroom, soundly asleep. The police, fortunately, knocked some sense into the listless boy, giving him a piece of advice on the importance of education. You really deserved that, kid. After receiving the inspiring pep-talk, the boy finally made his way to school with the policeman.

The post has since garnered over 8.5k shares, with more than a thousand comments from netizens on their love and appreciation towards the grandma and policeman.

“They are truly people who do everything for us. We need more police like these.”

“The policeman won my heart. Young man, you’ll see how important education is. Take it from someone who has screwed up before.”

“It’s not that common to have a policeman driving you to school like this.”

“One day you’ll understand why the police and your grandma did that.”

Remember, kids. Going to school and receiving an education is really important in carving your own future. So don’t play play and go to school, okay?

Also read: PDRM Will Now Catch Students Who Ponteng School in Uniform and Bring Them to Balai