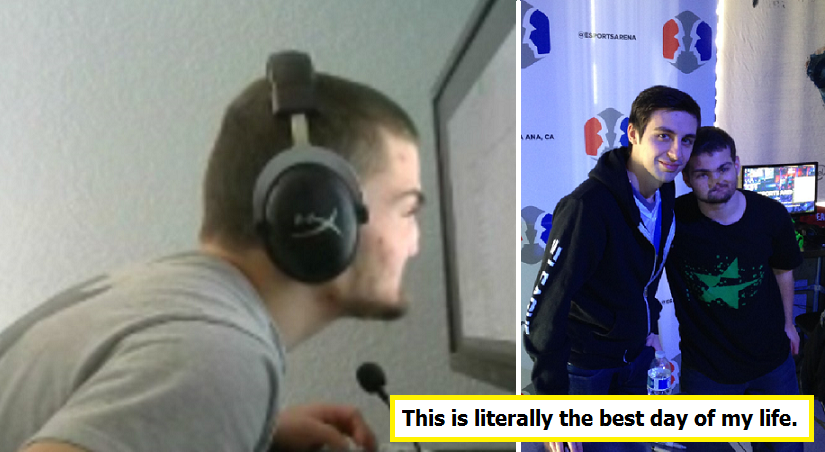 The internet as we know it can be extremely toxic as people get to hide behind anonymity to show their inner demons. However, through the internet, we’re also able to spread more kindness by doing good deeds.

Just last week, the internet has shown both its ugly and pretty sides.

Adam ‘Loop’ Bahriz is a legally BLIND and DEAF Counter-Strike: Global Offensive player. And he is pretty damn good at the game! Yes, that means he still can see and hear but legally, he is considered disabled. So, he has to go super close to the screen.

The 17-year-old man was playing a game with a group of strangers on April 17, 2017, Mashable reported. He sent a pre-typed message explaining his condition.

“‘Sup guys, I got a lot of teeth removed due to a genetic disease so I can’t speak that properly, I can still call but be nice.”

Right after that, Loop shared some strategies to start the game by speaking into the mic. But due to his condition, his speech sounded slurred. Immediately, his teammates got annoyed at him. They told him to stop talking and one player even went as far as to mute him in the game! They all thought Loop was just trolling.

After the first round ended, Loop typed into the chat,

This treatment from his horrid teammates hurt Loop a lot and he could be seen trying very hard to choke back his tears.

But those terrible people were just too much. They then kicked Loop off the game!

Mind you, this whole scenario took place LIVE on the streaming platform, Twitch. There were quite a few people watching when this horrible bullying happened.

Some of his viewers immediately took relevant clips from the incident and shared it onto ESEA’s forum and Reddit. This then sparked a huge surge of support for Loop.

What started as a horrible day turned into an amazing day for this young man. He wrote on his Twitter;

Not only did his day go well, after that incident, everything got much better in his life. The amount of people watching his streams increased tremendously and loads more people donated.

These donations will allow Loop to get dentures when he turns 18 in November. In the ‘About Me’ section of his Twitch account, Loop further explained his condition.

“I suffer from an extremely rare genetic condition called Hereditary Sensory and Autonomic Neuropathy (HSAN) type 2, which basically means I am unable to feel pain.” “This disease has led to lots and lots of issues for me, including the removal of all but 3 of my teeth, the loss of half my nose, being legally blind and deaf to the point where I use hearing aids.

But Loop didn’t let any of this bring him down. He wrote,

“Despite all of this, I still try to keep a positive attitude and be nice to anyone I meet in game or in my chat. And I hope you do too. 🙂 “

On top of all those donations, he was even acknowledged by many professional CS:GO players. Top players tweeted about this cool guy and Ryan ‘Freakzoid’ Abadir even played a few games with Loop! But none can beat the fact that the French professional CS:GO team EnVyUs actually offered Loop a contract to stream and to represent the team! Loop was ecstatic. He could not contain his happiness as he said,

“This is absolutely ridiculous!

“My life is different. Thanks so much. This is a dream come true. I never thought this would happen.

“I’ve been playing this game for almost five years now, just for fun, and then this happens? You know what I mean? It’s crazy.”

Don’t forget to check out Loop on Twitch, YouTube and Twitter. This is one amazing CS:GO player (and person in general) you don’t wanna miss out on.